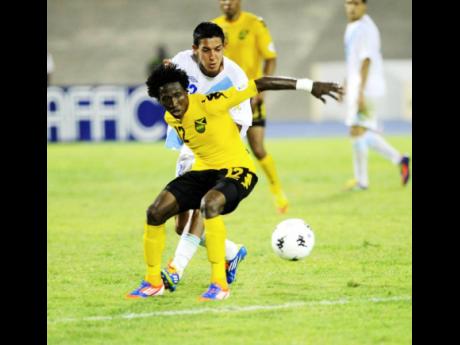 Demar Phillips certainly enjoys playing against Guatemala, having scored three goals in his last two meetings against the Central Americans, including the opener in Friday's 2-1 FIFA World Cup qualifier win inside the National Stadium.

The St Thomas native and former Seaforth High School standout dialled up a long-distance drive that bounced awkwardly in front of the Guatemala goalkeeper Ricardo Jerez to send the Jamaicans in the lead after 41 minutes.

His latest strike came after a brace against the same opponents in a 2-0 CONCACAF Gold Cup win for the Boyz last year, and as far as the Aalesunds left-sided player is concerned, Guatemala would be a welcomed opponent every week.

"It's good for myself and good for the team. Its true that I scored two goals against Guatemala in the Gold Cup and came back here in front of my home crowd to score the lead off goal in a 2-1 win, so it's a great feeling and I'm very happy," said Phillips after the game.

"I like playing against them (Guatemala), they play good football and we play very good football as well, and when you get a win over a team like that and score you have to feel well," he continued, a big smile stapled across his face.

The diminutive player has a knack for scoring crucial goals for Jamaica, and has developed into one of the team's 'X-Factors' over the years.

"It doesn't matter where I play, left back or left midfield, I always manage to find the spaces and pop up with goals every now and again. I guess I am almost a natural goal scorer," Phillips laughed, before recounting his thoughts as he saw his shot better Jerez and settle in the net.

"I had just one thing in my mind and that was to control the ball and shoot and thankfully it ended up in the back of the net," Phillips added with a slight admission of good fortune.

The 28-year-old believes Jamaica has all the components to progress through the semi-final stage of qualifying and advance all the way to the 2014 FIFA World Cup. The team will, however, need more performances like that shown in the second half against Guatemala.

"In the first half I believe I had a normal performance; myself and the team, but I think in the second half we created many chances and should have scored more goals. We played really well in the second half," said Phillips, who will be hoping that Friday's goal will not be his last on this 'Road to Rio' campaign.