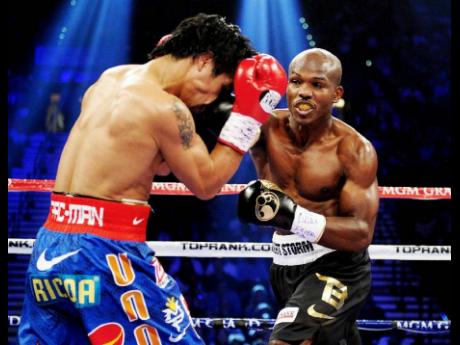 Manny Pacquiao (left) covers up as Timothy Bradley throws a punch in the first round of their WBO world welterweight title fight on Saturday. Bradley won by a split decision. AP

Timothy Bradley promised to shock, though the biggest shock in his fight with Manny Pacquiao came from the judges' scorecards.

Promoter Bob Arum fumed, the crowd at the MGM Grand arena booed, and Pacquiao seemed stunned when the decision was announced. Arum said there would be a November rematch, though he blasted the way the decision went down.

"I've never been as ashamed of the sport of boxing as I am tonight," said Arum, who handles both fighters.

"I did my best," Pacquiao said. "I guess my best wasn't good enough."

Pacquiao tried to turn the fight into a brawl, using his power to hurt Bradley in the early rounds. But Bradley changed tactics in the middle rounds and used his boxing skills to win enough rounds to take the narrow decision for the welterweight title.

It ended a 15-fight winning streak by Pacquiao dating to 2005 that turned him into a boxing superstar and made him a national hero in the Philippines.

"I thought I won the fight," Bradley said. "I didn't think he was as good as everyone says he was. I didn't feel his power."

Bradley seemed hurt in the fourth and fifth rounds, but Pacquiao had trouble landing big punches after that. Still, he seemed in control of the fight everywhere but on the judge's scorecards.

"Can you believe that? Unbelievable," Arum said. "I went over to Bradley before the decision and he said, 'I tried hard but I couldn't beat the guy'."

"I'll make a lot of money off the rematch, but this was outrageous," Arum said.

It was the biggest fight of Bradley's career and it came with a minimum $5 million payday. The rematch will be even richer, though Pacquiao's loss could damage any plans for a fight with Floyd Mayweather Jr.

Mayweather did not see the fight because he is serving a sentence on a domestic abuse charge at a jail a few miles from the MGM Grand.