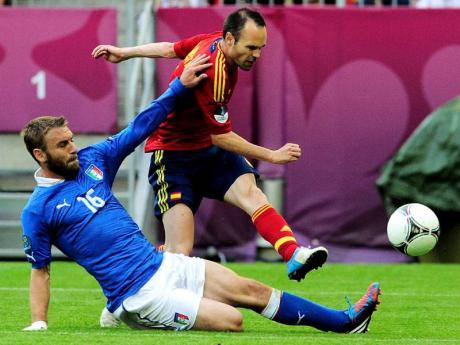 For Spain, a tie in their Group C opener counted as a bit of a stumble. For Italy, a bit of a reprieve.

Opening their bid for a third straight major title, the Spanish rallied to earn a 1-1 tie yesterday against Italy, which entered this year's European Championship amid another match-fixing scandal.

Antonio Di Natale put Italy in front after an excellent set-up from Juventus midfielder Andrea Pirlo in the 61st minute, but Cesc Fabregas tied it for the defending champions three minutes later by finishing off a dazzling display of Spain's trademark passing game.

"Being the favourite now is complicated, but in the end we found the character," Fabregas said.

Spain, which followed up their Euro 2008 victory with the 2010 World Cup title, dominated the Group C match for long stretches but struggled to finish at times, while Italy relied on dangerous counter-attacks.

"The thing that really disappoints us is that we allowed them to equalise very quickly," Italy coach Cesare Prandelli said. "We were playing the world champions and we should have made them work harder to get back into the game. We gave Spain the chance to score goals."

The draw ended a 14-match winning streak for Spain in competitive matches, which began after a 1-0 loss to Switzerland to open the last World Cup.

Spain pulled a surprise by starting with no regular strikers in its line-up, with Fabregas at forward between David Silva and Andres Iniesta - leaving Fernando Torres, Alvaro Negredo and Fernando Llorente on the bench.

Italy countered with an attack of Antonio Cassano and Mario Balotelli and an untested three-man defence.

Di Natale replaced Balotelli in the 56th and scored five minutes later, collecting a pass from Pirlo just as he slipped in between two defenders, then expertly shooting around Spain goalkeeper Iker Casillas.

The 34-year-old Di Natale has scored 20 or more goals the past three seasons with Udinese in Serie A.

Fabregas' goal from the centre of the area capped a series of passes that started with Iniesta giving the ball to Silva, who then found Fabregas cutting toward the goal.

The Italians, just like when they won the 2006 World Cup, are weathering a domestic match-fixing scandal.

In the other match in the group, Croatia defeated Ireland 3-1.