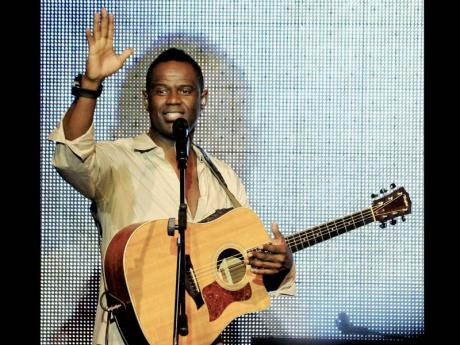 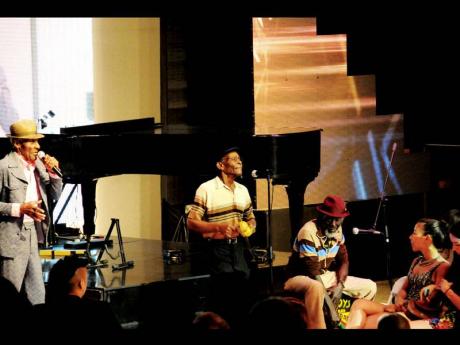 The Jolly Boys get up close and personal with their audience at Pulse's Caribbean Fashionweek on Sunday night at the National Indoor Sports Centre. - photos by Winston Sill/Freelance Photographer
1
2

It was definitely the ideal way to bring an end to Caribbean Fashionweek 2012 on Sunday night, the melodic vocals of Brian McKnight filling the National Indoor Sports Centre against the backdrop of screaming women.

As the curtains were being drawn on the runway that has seen 50 local and international designers over two days, women were still clinging to McKnight's every word.

Earlier, Ann-Marie Robinson-Chin's Kokobeenz women's wear collection revealed juicy-coloured swimwear which received applause and cheers from the audience who seemed to have a particular liking for a multicoloured swimsuit, accented by accessories that resemble wings.

Juliette Dyke's Julan collection was next. It consisted of several dresses of various hues which seemed to have found favour with the audience who responded positively several times during the display.

CFW sponsors Appleton, unleashed their Appleton Temptation Isle collection on the night. Models strutted the runway, breaking into occasional dances. The rum company's red, gold, silver and blue swimwear was a hit with the audience.

And while it was not the occasion, models walked in bridal gowns by 2011 Mission Catwalk winner Shenna Carby during her collection. A young girl clad in her own 'weddingwear' was a crowd favourite.

The Cloth from Trinidad and Tobago's Robert Young comprised mainly white pieces mixed with red, green and yellow. The pieces were accompanied by bags and other accessories of similar colour. Models not only walked to display the pieces, but entertained patrons with their own dances.

Ashley Martin's Attitude collection was quite a sight to behold as silver, gold, orange and green from various pieces glistened under the glaring lights, much to the delight of patrons who feasted their eyes on the spectacle.

Jamaica's dancehall culture was not left out of the mix. The Biggy collection, designed by Earl Turner, displayed several dancehall themes as the designer used his trademark denim to accentuate several themes.

It was not just a night of fashion, however, as The Jolly Boys brought mento to the CFW stage, singing Emmanuel Road and Rehab, among other songs. But it was McKnight who thrilled the female-dominated audience who would join in singing his hits on call.

One lucky woman was the envy of all after she was gifted with a bouquet from the entertainer.