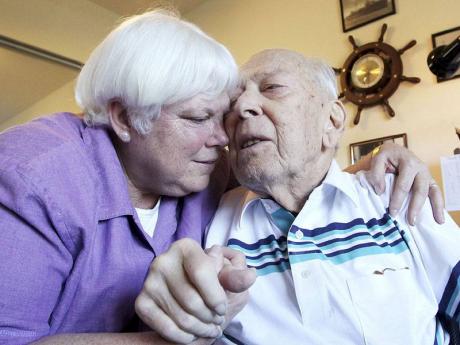 In this April 12 photo, Ruth Wilson (left) embraces her father, who declined to be identified for fear of being targeted for fraud again, in his home in Bothell, Washington.

After the glitz and glamour of spending the easy money generated by the lottery scam, the harsh reality of life without the illicit scheme is now facing hundreds of persons in St James.

Montego Bay, St James, has been labelled the epicentre of the scam in which United States residents - particularly elderly persons - are conned into sending money to Jamaicans to claim jackpots, and there are fears that with the crackdown on the scammers, the city could implode.

President of the Montego Bay Chamber of Commerce and Industry, Davon Crump, is calling for a system that will transform scammers and their understudies into productive individuals.

"I believe resources should be put in place to allow for persons to get skilled or start their own businesses," said Crump, the regional manager for Chas E. Ramson.

He was supported by Mark Kerr-Jarrett, the well-known Montego Bay-based land developer.

"The scammers are ingenious and if they can channel that intelligence into legitimate employment solutions, we would be on the path to fill the void created by the scam because they will definitely find a way to eke out a living and I hope that it will not be at the expense of the country's safety.

"Alternatives, opportunities and revenue streams for the individuals and families must be put in place at the same time as clamping down on the lotto scam," Kerr-Jarrett added.

"There is some speculation that the lottery scam came about in Montego Bay when the void was created when all the ganja men were shipped off (by extradition to the United States). I think there has to be a programme put in place for youth employment."

The lottery scam task force headed by the Jamaica Constabulary Force has been making some inroads in arresting fraudsters and confiscating their millions in cash and luxurious assets in recent months.

But the task force faces an uphill battle as the criminals are spending big bucks to get legitimate covers from several businesses including state agencies.

Kerr-Jarrett, who has also served as chamber president and chairman of the St James Parish Development Committee, says the HEART Trust/NTA should play a critical role in shaping life after the lotto scam.

"There are considerable opportunities abroad for skilled labourers like carpenters, welders and others such as tradesmen especially in Canada and I think that avenue must be explored."

Montego Bay's vibrant information communication technology industry has been hardest hit as the telemarketing scam was initially driven by employees furnishing personal information of potential victims to the highest bidder.

While the community of Granville, St James, is considered the hotbed of lotto scam activities, public relations officer for the Granville Community Development Committee, O. Dave Allen, says his home community has suffered more than benefited from the vaunted lottery scam.

"More than 200 persons have been killed in the past six years; houses and rooms have been abandoned and the school system has suffered from serious haemorrhaging. It has left in its wake angry young men with guns and high expectations," argued Allen.

Allen argues that the Citizen Security and Justice Programme (CSJP) must re-engage the community through consultation with residents.

"It should anticipate the fallout from the crackdown and elimination of scamming and redouble its efforts at providing an alternative livelihood."

The CSJP was conceptualised in 2009 as a crime prevention initiative of the Ministry of National Security. It is tasked with strengthening community safety and security in vulnerable and volatile communities.

'The scammers are ingenious and if they can channel that intelligence into legitimate employment solutions, we would be on the path to fill the void created by the scam.'