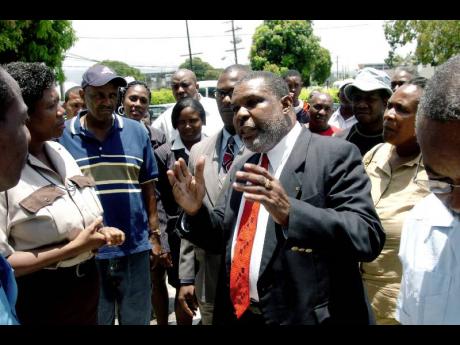 Ezroy Millwood, head of the National Transport Co-operative Society (NTCS), yesterday likened the Government's approach in dealing with a multimillion-dollar award due to his entity to the slave trade.

The Government was yesterday granted the go ahead to challenge the $1.8 billion award to the NTCS before the United Kingdom Privy Council.

"This is an abuse of power and is no different from the slave trade," Millwood who was obviously disappointed with the outcome, remarked yesterday.

"Justice delayed is justice denied," said Millwood who has so far received no interim payment arising from the suit.

The Government and the NTCS have been in the courts for more than a decade, following a decision to end the sub-franchise agreement between the bus company and the state-owned Jamaica Urban Transit Company.

The case has also been to the Privy Council which made a determination in 2009 as to how payment should be calculated. The NTCS had sued the Government to recover losses.

Last September, the Court of Appeal ruled that the Government should pay $1.8 billion plus interest at three per cent to the NTCS.

The Government applied to the Court of Appeal this year to take the matter to the UK Privy Council on the basis that there was a problem with the way the award was calculated.

It is claiming that the award should not have been calculated from 2004 but from 2009 when the Privy Council made the ruling.

Millwood's lawyers Lord Anthony Gifford QC and Patrick Bailey had opposed the application on the grounds that it was out of time. They said it should have been filed 21 days after the Court of Appeal made the award.

In granting conditional leave, the court comprising Justice Dennis Morrison, Justice Hillary Phillips and Justice Norma McIntosh said it was a fit case to go to the Privy Council for determination.

Final leave to appeal will not be granted until the Government has complied with the court's order to take steps within 90 days to prepare the record for dispatch to the Privy Council.