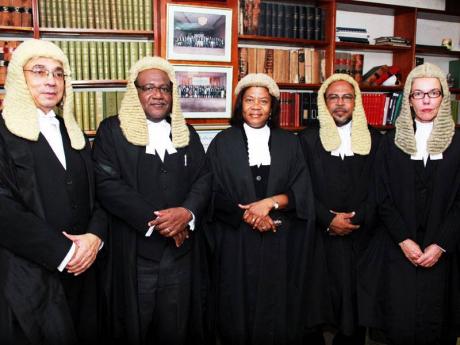 Newly appointed Queen's Counsel pose with Chief Justice Zaila McCalla (third left) in her chambers after she admitted them yesterday to practise at the Inner Bar. They are (from left) George Soutar, Walter Scott, David Batts and Sandra Minott Phillips. - Contributed

Chief Justice Zaila McCalla yesterday called on the four newly appointed Queen's Counsel, to continue to motivate other lawyers to maintain a high standard of professionalism.

McCalla described their appointments as a landmark event and emphasised that they had attained the highest personal and professional standard of their careers.

She said their appointments came at a time when the wholesome attributes, courtesy, honesty, professionalism and dignity were on the decline.

The chief justice made the comments when she admitted attorneys-at-law George Soutar, Walter Scott, David Batts and Sandra Minott Phillips to practise at the Inner Bar.

The ceremony took place at the Supreme Court and was attended by a large gathering including relatives and members of the legal profession.

The newly appointed Queen's Counsel all pledged to continue to uphold the highest standard of their profession and continue to motivate others. They also thanked their families, friends and colleagues for their continued support over the years.