'We want back the station' 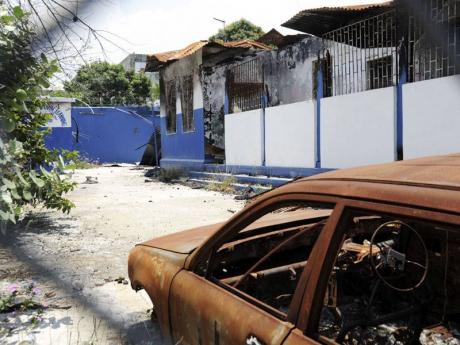 The Hannah Town Police Station in west Kingston, which was gutted by fire during the civil unrest in Kingston in May 2010. - Norman Grindley/Chief Photographer

TWO YEARS after the Hannah Town Police Station was burnt down, there are still no immediate plans by Government to rebuild it despite the challenges some community members are claiming that they are experiencing.

On a visit to the community last week, a number of persons expressed their disgust about the absence of the important facility, pointing to an increase in crime in the area.

"We need our station because it is affecting us. A lot of crimes a go on in the area, such as break-ins and robbery, so we can't continue like this," one community member, Sharon James, told The Gleaner.

She added: "We want back the station, so we ensure that we clean it up every Labour Day from it was burnt down. We not feeling safe around here. It was better when the station was here. When something happen, we have to be going out at Denham Town Police Station and it is not safe, because we have to do that even when it is night and sometimes we don't have any taxi fare to pay go out there."

Chris Moncrieffe said the youth in the community are feeling the pinch of the absence of the police station, as they no longer have access to the homework centre, which the police operated.

He, too, raised concerns about the safety issues in the community, saying without the station, residents' lives are at risk.

Senior Superintendent Terrence Bent, who heads the Kingston Western Police division, told The Gleaner that a mobile police station operates in the area, which acts as the point of contact for the residents.

"Most of the reports ... are done at the Denham Town Police Station, but what we realise is that people normally feel that without a station they are less secure, because the physical plant is not there. But we have tried to provide a 24-hour presence with patrols in the area so as to replace that static police post that was there before," he said.

He acknowledged that the absence of the station has caused some discomfort to the residents, but said the police are trying to lessen the effect.

"There is an inconvenience in terms of what was there and now, but the mobile post and the other police can take some of those reports on the ground, but things that require detailed documentation, we will have some challenges there," he explained.

The residents said, however, they have not seen the mobile station for the longest while.

In an email response, National Security Minister Peter Bunting said a decision was made by the previous government not to rebuild the Hannah Town Police Station at its present location.

One of the reasons, he said, is because it was surrounded by houses, and residents were able to look down from their houses into the police station.