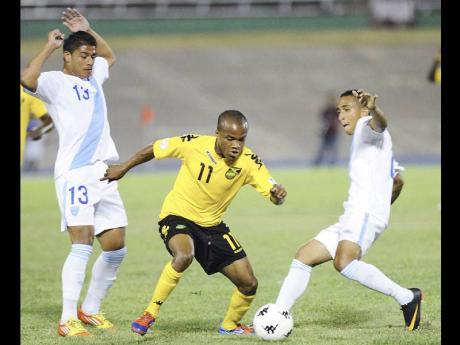 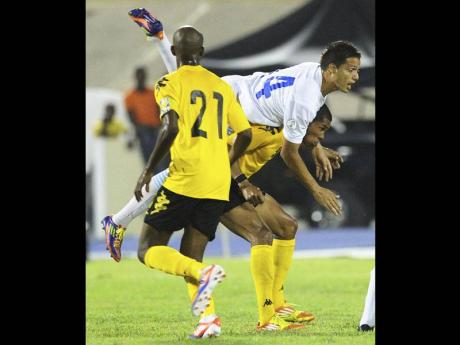 Jamaica striker Ryan Johnson is fouled by a Guatemala defender, while teammate Luton Shelton (left) looks on during the CONCACAF World Cup Qualifying football game at the National Stadium on Friday night. Jamaica will tackle Antigua and Barbuda in St John's later.
1
2

Jamaica's Reggae Boyz will do well to enter today's round three Group A FIFA World Cup Qualifier against regional minnows Antigua and Barbuda with a reminder that their opponents were not only responsible for crushing Haiti's 2014 World Cup dreams, but have also brought heartache to Jamaicans in the past.

Antigua and Barbuda knocked Jamaica out of the 1989 Shell Cup tournament with a 1-0 win in what was the teams' first meeting. Jamaica have since gone on to win the four subsequent games played between the outfits, but it is hardly ever an easy outing for Jamaican teams in the Eastern Caribbean and today's encounter could be another close affair. Kick-off time is 6 p.m. (Ja time).

"No team in this World Cup qualification is going to be easy, especially because we know it's a Caribbean rivalry," said Whitmore shortly after his team managed a 2-1 win inside 'The Office' against Guatemala last Friday.

"We expect a tough showing from the Antiguan team and we are up for the challenge and we are preparing for them as well," Whitmore added.

Goals from Demar Phillips (41st) and Ryan Johnson (46th) got Jamaica's campaign off to a positive start as the country looks to return to the FIFA World Cup finals for a second time after their 1998 appearance. Jamaica have not been to the final qualifying round since 2002, but a win in St John's today and positive results in back-to-back games against the United States in September will put them in good stead.

"We got the win at home and have three points in the bag, now we have Antigua and Barbuda; we are concentrating on that and moving forward from game to game," said striker Luton Shelton, who left the field in discomfort after a groin concern against Guatemala.

"Everyone believes in the abilities of this team, our goal is to get to the World Cup and we are focused and making the most of our abilities. We are all approaching this Antigua game as disciplined as possible, we know that we have to play well away from home as well," Shelton added. "This is one of our best chances to go all the way but I am not thinking about all that just now, we are focused on taking it one game at a time."

Shelton, who plays his football in Turkey for Karabukspor, insists that he will be ready for the game against Antigua and Barbuda and that he is thriving under the new responsibilities given to him as the team's vice captain.

"I always go out there and try to play disciplined, it's not about me scoring goals all the time, I want to score goals of course, I am a goalscorer after all and have scored over 30 goals for the national team, but at the same time it's not so important for me as long as we win the games, play disciplined and get into the World Cup," said Shelton.

"I'm not thinking too much about the groin, when I got the rebound shot (against Guatemala) I took it and felt a little tug and after that I was scared because I really don't want to get injured so I thought the best thing was to protect myself and come back for the next game," said Shelton in regards to his fitness.

Jamaica with three points are top of Group A along with the United States, who defeated the Antiguans 3-1 in their opener also played last Friday.