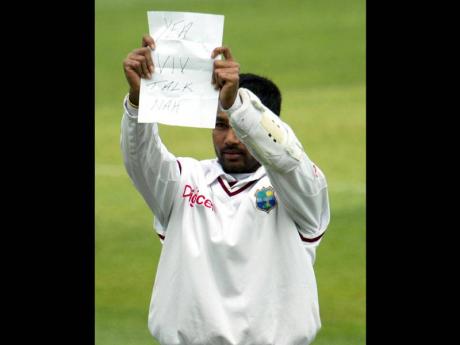 West Indies' Denesh Ramdin holds up a note directed at Sir Viv Richards after reaching his 100 during the fourth day of the third Test match against England at Edgbaston cricket ground, yesterday. - AP

Wicketkeeper/batsman Denesh Ramdin has been slapped with a fine by the International Cricket Council (ICC) for his controversial jibe at Sir Vivian Richards while celebrating his century on Sunday's penultimate day of the final Test against England.

Ramdin, who finished on an unbeaten 107, brandished a piece of paper in the direction of the media centre with the words "Yeah Viv Talk Nah", scribbled on it.

The action was in response to criticism levelled at him by the legendary West Indies batsman and captain, now a media pundit for the BBC, following the Trent Bridge Test.

While Ramdin later regretted his behaviour, he was fined 20 per cent of his match fee for "conduct contrary to the spirit of the game" after on-field umpires Tony Hill and Kumar Dharmasena reported the incident to match referee Roshan Mahanama.

"It is important that we do not allow a precedent to be set with such a premeditated celebration by Mr Ramdin," Mahanama said.

"We all understand the importance of celebrating a milestone, however, one should not use that time as an opportunity to hit out at one's critic or send messages to the world.

"I hope Mr Ramdin has learnt his lesson from this incident and that we will not see such behaviour by him or any player in the future when celebrating an achievement within a game of international cricket."

There was no need for a hearing after Ramdin pleaded guilty.

The player, who had struggled for runs in the series, admitted following the day's play that he "got a bit emotional" and that his jibe at Sir Viv had been "unnecessary".