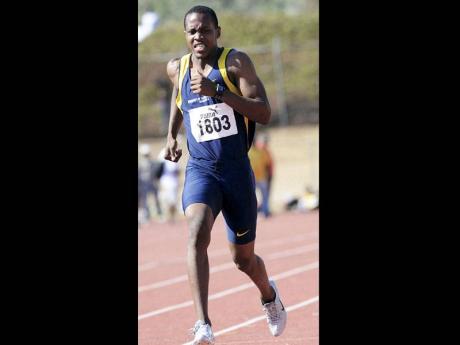 WITH the IAAF World Junior Championships down to take place next month in Barcelona, Spain, the boys Under 20 100m event at this weekend's JAAA/Supreme Ventures Limited National Junior Championships inside the National Stadium, will no doubt be one of the most anticipated events on the schedule.

The quartet will meet on Saturday's opening day of the two-day meet, and a lot of fireworks are expected.

Julian Forte, Jahzeel Murphy, Odean Skeen and Odail Todd are set to feature in an intriguing battle for the two spots up for grabs.

Both Skeen and Todd already have major titles as they are World Youth Olympic and World Youth champions respectively, while Murphy, who is yet to compete outside of the Carifta and Junior CAC Games due to injuries in the past and Forte, who two years ago went to the World Junior Championships in Moncton but did not compete due to injury, will be hoping to join that rank.

Forte, who now attends the University of Technology (UTech), will start as favourite to win the event here, as a few weeks ago at the JAAA All Comers meet, he showed his old form with a fantastic 10.19 seconds clocking to beat a quality field.

The time done by Forte has him at joint number five on the IAAF World Junior list with three other athletes and he looks set to go even faster.

At the Carifta Trials in March, he led Murphy in the 100m for a long way before a slight injury caused him to slow down significantly.

His former teammate at Wolmer's Boy's, Skeen, who has also been plagued by injury since his success at the World Youth Olympic Games, has shown signs that he is getting back into top form this season. At the UTech Classics in April, he won in a personal best 10.33 seconds and could steal the show on Saturday.

A few years ago, Murphy was touted as the next Usain Bolt by many experts but is yet to realise that potential due to injury. However, Murphy, who ran at season best of 10.39 seconds at the ISSA/GraceKennedy Boys and Girls' Athletic Championships where he was second, showed last Saturday at the adidas Diamond League meet in New York that he is getting back into his own. He finished a very close second in the Junior Boys 100m in 10.47, to the United States' Levonte Whitfield, who won in 10.45 seconds.

After success at the World Youth level, Todd with a season best of 10.42 seconds done in Montego Bay in February, will be hoping to finish among the top two in his bid to compete in the marquee event in Spain and try to emulate the feat of Dexter Lee who won both the World Youth and the World Junior titles.

All four are quality athletes and despite Forte being the fastest so far this season, any number can play when they meet on Saturday.