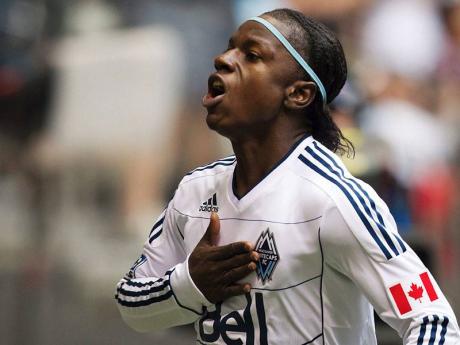 Vancouver Whitecaps' Darren Mattocks, of Jamaica, celebrates his goal against the Houston Dynamo during the first half of an MLS soccer game in Vancouver, British Columbia, on Sunday. - AP

After some early bad luck off the field, Darren Mattocks is showing why he was the second overall pick in this year's MLS Superdraft.

Mattocks scored in each half to help the Vancouver Whitecaps beat the Houston Dynamo 3-1 on Sunday.

The 21-year-old speedster missed about six weeks earlier in the season while recovering from severe burns suffered during a cooking accident at home. He's been back for a month, but had played just 100 minutes before Sunday's victory.

"When you get your chance you just have to make full use of it,'' said Mattocks, who is now tied for the team lead with three goals.

Jordan Harvey added a late goal as Vancouver won the opener of a three-game homestand. Joe Cannon made three saves in the Whitecaps' first game since May 26.

Mattocks, a Jamaican, scored 21 times in 22 games at the University of Akron last season and scored in the 90th minute of Vancouver's 1-1 tie with Portland two weeks ago.

"I know I'm capable of scoring goals,'' he said. "That never came back into my mind. I just wanted to get back into the playing pitch as fast as possible and do what I was brought here to do.''

Mattocks opened the scoring in the fourth minute with his second goal in as many games. Young-Pyo Lee rushed down the right side and centred the ball to the streaking Mattocks, who one-timed a volley past Tally Hall.

The 21-year-old Mattocks put the Whitecaps in front 2-0 in the 66th minute, converting a feed from Gershon Koffie.

"One thing about him is he creates chances,'' Vancouver coach Martin Rennie said. "Today he created maybe four, five or six chances. If he gets consistent with his finish he can score a lot of goals.''

The Dynamo cut the Vancouver lead in half in the 83rd minute when Kandji took a pass from Brian Ownby and fired a shot past Cannon for his first goal with Houston.

But Vancouver put the game out of reach in the 88th minute when Harvey took a pass from Koffie and beat Hall for the defender's first goal since 2010.

Mattocks also scored the tying goal two weeks ago when he came on to score in the 90th minute of a 1-1 tie with Portland.