'We have a lot of respect for past players' 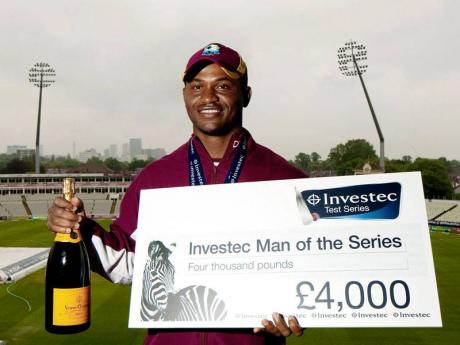 Player of the Series, West Indies' Marlon Samuels, poses for photographers as the third Test match between England and West Indies is declared a draw at Edgbaston cricket ground, Birmingham, England, yesterday. - AP

Ramdin celebrated his century on the fourth day of the third Test on Sunday by producing a piece of paper with the words "Yeah Viv Talk Nah" scribbled, and brandishing it towards the media centre.

It was in response to criticism levelled at him by Sir Viv, now an analyst for BBC Radio, following West Indies' second Test defeat at Trent Bridge.

"Denesh and I spoke and he spoke in the media yesterday and he said probably his emotions got the better of him," Sammy told a media conference.

Following the nine-wicket defeat at Trent Bridge, Sir Viv said Ramdin had "deteriorated in such a big way" and looked like "a totally lost guy".

Sammy said he expected Ramdin to discuss the issue with Sir Viv, but had no idea if the player would apologise in person.

"I know Ramdin would probably have a word with him. There's no love lost, like he said. Hopefully we could move on and continue respecting our past players," Sammy noted.

"Knowing the type of person Denesh is, probably when he sits back and reflects ... when he meets with Sir Viv (he may apologise)."

The incident provoked the ire of another West Indies legend, former fast bowler Michael Holding who is now a pundit for Sky Television.

Holding blasted Ramdin's action as 'crass' and said he should be fined by team management.

"That's Mikey's opinion. Again, a lot of people have been having opinions about what the team should do and what should happen," Sammy pointed out.

"The Test match is over so we are going to reflect on this Test match and probably come up with the best solution to it (the incident).

"Not that it's a problem. Obviously the ICC match referee (Roshan Mahanama) has done his part. We're all human beings and things do happen, and we as a team we support our players but, with that said, we've got to do what's right.

"Denesh has realised that he overdid a little bit and will move on from there."