Hampden to absorb rum tax for now; others hike prices 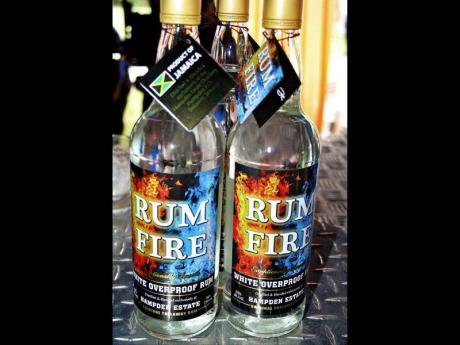 'We have decided that we will not be changing the price for summer ... as a gift to the people. ... We don't want to hit our customers that hard.'

Hampden Estate, which ventured into bottling white overproof rum for the local market just over a year ago, has decided to cut its margin on its brand, Rum Fire, by absorbing the recently imposed more than 200 per cent increase in special consumption tax (SCT) on the product, at least temporarily.

Other players in the market have not decided to go the route taken by Hampden, but at least two producers have predicted that sales will fall considerably as a consequence of the increase in the SCT.

The effect of Hampden's decision not to increase prices at this time is that consumers will not see an increase in the price of Rum Fire until about the end of August, according to director of marketing at Everglades Farms, Christelle Harris.

The decision to hold prices at pre-budget levels is being pitched around the idea that Everglades Farms, which owns and operates Hampden Estate, wants to hold prices steady in the spirit of the Jamaica 50 Independence celebrations.

"We also decided to do this especially because it's so time-sensitive," said Harris, referring to the new SCT regime which takes effect on June 1 at the same time that a number of other taxes were increased or imposed on products.

As part of the revenue measures for the 2012-2013 fiscal year, Finance and Planning Minister Dr Peter Phillips announced a rescinding of the 30 per cent ad valorem tax - or 30 per cent of the value - on overproof rum and the substitution of a specific rate of J$960 per litre of pure alcohol.

Both J. Wray and Nephew, the largest distiller, blender and bottler of white overproof rum, and Worthy Park Estate, which produces the spirit under the label Rum Bar Rum, have since announced increases of J$20 to J$30 or 25-50 per cent on a drink at the bar.

Harris said that with the increase in SCT, were Hampden to maintain its margin before the new tax was imposed, it would have had to increase the price of Rum Fire to J$5,000 per case of 12 bottles of 750-millimetres.

"We have decided that we will not be changing the price for summer," Harris said, adding that they have decided to maintain pre-budget prices "as a gift to the people" until the end of August when another review on prices will be made.

"We don't want to hit our customers that hard," the marketing director told Wednesday Business.

Harris could not give a ballpark estimate as to how much of the taxes the company was expecting to absorb by keeping prices steady at this time because she said that would be based on sales of the product, which is exclusively distributed by Red Stripe Jamaica.

However, other players in the market have already increased their prices in keeping with the change in the SCT.

Earl Patrick, general manager for business development and marketing at the state-owned National Rums of Jamaica Limited, which produces Monymusk Overproof White Rum, said they have implemented the new SCT rate, pushing up the retail price per drink by between J$18 and J$20.

He surmised that as a consequence of the new tax and increased prices, the market for white overproof rum will take a temporary hit, lasting, he believes, for no more than about a month.

"We expect that we will hold on to our customers," he said.

Monymusk Overproof White Rum hit the Jamaican market only a few months ago, having its launch in November 2011 with limited distribution initially spread over Kingston and St Andrew, St Catherine and Clarendon before rolling out to other parishes.

KRB LEA Jamaica Rums Limited has also moved up the price of its Port Royal White Overproof Rum because the new tax has pushed up costs by about 150 per cent, according to the company's general manager, Duncan Messado.

He said it was difficult to fathom the impact of the SCT on the business at this time and would only be able to do so in about two months or so when new stock hit the market.

However, he is also projecting that demand will fall considerably as occurred, he said, when the J$960 SCT flat rate was imposed on a range of other alcoholic beverages, excluding white overproof rum, just over two years ago.

With the addition of the tax, Port Royal Rum, which Messado said had retailed for J$50 per drink or more depending on the geographical location and venue, will now sell for J$80 to J$100 per drink, or higher at some places such as clubs, he said.