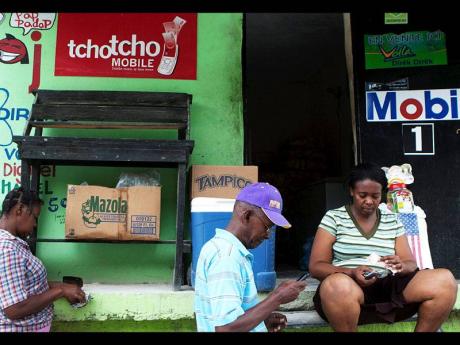 In this June 1, 2012 photo, a vendor of Digicel's TchoTcho Mobile services (right) makes a transfer for a client in front of her shop in Port-au-Prince, Haiti. Aid agencies trying to remake Haiti after a catastrophic earthquake are promoting a new way to bypass banks altogether: easy money transfers by cellphone. - ap photos 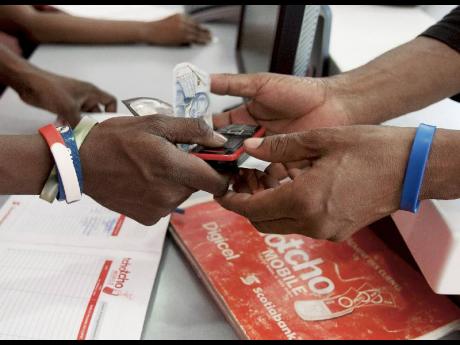 In this June 4, 2012 photo, a man takes his money, along with his cellphone, at Digicel's 'TchoTcho Mobile' office in Port-au-Prince, Haiti.
1
2

Getting money in Haiti can be a harrowing experience: Bank branches are few, most of them are in the capital and a simple transaction can take half a day.

Cash machines are scarce as well, and often broken or empty. And then there are the thieves who often wait nearby in hopes of finding a mark.

So aid agencies trying to remake Haiti after a catastrophic earthquake are promoting a new way to bypass banks altogether: easy money transfers by cellphone.

The United States government and the Bill & Melinda Gates Foundation have pumped millions of dollars into the plan, which lets people save and move money in mobile phone accounts and quickly withdraw it at a network of retail stores around the country.

As yet, though, few Haitians are buying the idea, which has become one of many post-quake projects to fall short of expectations and a reminder of how hard it is to change a society that has been repeatedly set back by political upheaval and natural disasters.

"I'm not going to invest my money in something I don't see," said James Alexis, a 33-year-old truck driver, as he stood in line at a bank in downtown Port-au-Prince, a wait he expected would take two hours. "It could be a trick."

Backers admit adoption has been slower than expected, though they remain optimistic it will expand, in part because so many Haitians rely on cellphones, often to find jobs.

Some 800,000 people initially registered for the service, even if only about 22,000 people regularly use it.

The service "has gone on in the face of political violence, political instability, cholera, gas shortages, you name it, and we're this far," said Greta Greathouse, director of a US Agency for International Development programme to improve financial services in Haiti.

"Does it mean we're there yet? No. We want it to be sustainable and there's a lot of work that needs to be done."

A spokesman for the Gates Foundation in Seattle, Chris Williams, said by telephone that the project is a "work in progress" but that it's going well.

"It's not a huge surprise to find some disconnect between the number of registered users and currently active users," Williams said. "It takes some time to build up to scale."

The project began months after the January 2010 earthquake when the Gates Foundation announced that it was creating the Haiti Mobile Money Initiative with a US$10 million donation.

USAID contributed another US$5 million for technical assistance.

The idea was to help the 90 per cent of Haitians who don't use banks by replicating a mobile money-transfer system that has gained popularity in countries such as Kenya, Uganda and the Philippines.

Two local cellphone companies, Digicel Group Limited and Voila, rushed to compete for the money by setting up their own mobile money transfer systems, and so far have been awarded a total of US$6.8 million from the foundation.

The system is essentially an account linked to the telephone.

Users can transfer up to US$250 at a time to another subscriber, who can then withdraw the money from a network of shops ranging from auto-parts stores to Internet cafes.

As much as US$1,500 can be transferred in a month. So far, international transfers are not allowed.

Digicel Haiti's former CEO, Maarten Boute, said at a Barcelona conference in February that it wasn't easy to explain the system.

"Our main lesson learned is how difficult it is to educate customers," said Boute, who is now a senior adviser to the Jamaica-based company.

"When we launched the service we assumed it would be something like selling a mobile phone, where you stick a mobile phone into someone's hand and almost anyone can start using it quite quickly because it's very easy to understand. With a mobile banking service or a mobile money service, it's not quite that easy."

The Christian charity World Vision joined the programme, seeing it as a simple, cash-free way to pay small rental subsidies to help people move out of the gloomy settlements that sprang up after the earthquake.

But many people didn't understand how to use the technology and were leery of it, said Keith Chibafa, who oversees the project for World Vision. The non-profit registered 6,000 subscribers for the service, but only 1,000 actually use it.

Confidence was undermined on one occasion when residents of a camp in the city of Croix-des-Bouquets, outside the capital, went to collect their payments and were told there was no money.

"We did have an agent running out of cash," Chibafa said. "It was a problem, a serious problem."

Cab driver Ernst Figaro said he doesn't trust the new service any more than the banks, which are not known for their customer service.

"The electronic system in Haiti is not standing on its feet yet," Figaro said while taking a break from work on a park bench. "I just don't trust putting my money in this system."

Others, such as Wilner Destina, have become converts.

The 40-year-old street painter signed up six months ago because he was eager to avoid the frustrating hourlong lines at commercial banks.

"It allows us to do (money) transfers with ease," Destina said outside a Digicel store in downtown Port-au-Prince after sending the equivalent of US$50 to a friend in Gonaives, a port city 110 kilometres (68 miles) northwest of Haiti's capital.

David Sharpe, Digicel's director of products and services, hopes to find more people like Destina, attracting them with features such as a lottery played on the cellphone and, later, international wire transfers.

More users will arrive through a new government programme that will use the service to make transfers to as many as 100,000 mothers who keep their children in school.

With the recent acquisition of Voila by Digicel, Sharpe joked in an interview that mobile banking will take off in the coming years.

"I'll put 10 bucks down that we beat all of your expectations."