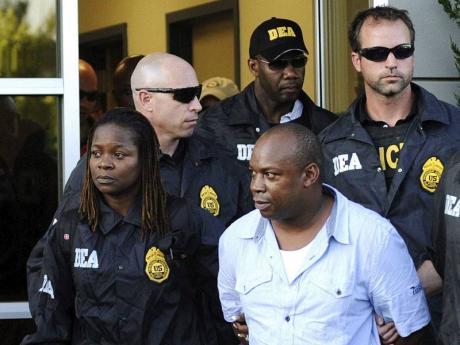 In this June 24, 2010 file photo, US Drug Enforcement Administration agents escort Jamaican drug lord Christopher 'Dudus' Coke from the Westchester County Airport to a waiting vehicle, in White Plains, New York. Coke, who pleaded guilty to US charges of drug and gun trafficking, was sentenced to 23 years in prison on Friday, June 8, 2012 in federal court in Manhattan. - FILE 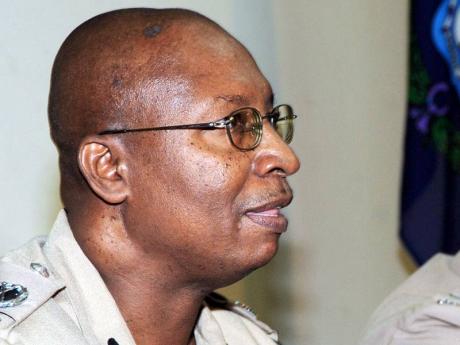 
FOLLOWING an order by district judge Robert Patterson in New York last week that gangster Christopher 'Dudus' Coke pay over US$1.5 million to the US Asset Forfeiture Unit, local law enforcement say they have intensified their search for the ill-gotten assets of confessed drug lord.

Deputy Commissioner of Police Glenmore Hinds told The Gleaner yesterday that the civil processes contained within the ambit of forfeiture law and the Proceeds of Crimes Act (POCA) are being applied to confiscate some of Coke's assets.

Hinds said that the forfeiture efforts of the US and the local authorities are separate.

"Our efforts are separate and apart from that seizure of coke's assets being pursued by the United States, it is a parallel process," he asserted.

Hinds also said that relatives and associates of Coke who conspired to conceal the ill-gotten gains are under the radar of investigators.

"We are moving to identify the assets and that takes some time and then you go for the freezing of these assets and then for confiscation, the truth is, it is not the shortest process."

"We are confident, that we will be able to confiscate some of these assets," he added.

Coke, a director of Incomparable Enterprise, a company which received many lucrative government and private contracts in Jamaica, was last week sentenced to 23 years in prison for drug related offences.

He is allegedly the owner of at least two multimillion-dollar houses and several high-priced motor vehicles.

At the time of his sentencing in the US last week, district judge Robert Patterson ordered Coke to pay over US$1.5 million to the US Asset Forfeiture Unit.

"In connection with his guilty plea, Coke admitted to trafficking in over 3,000 kilograms of marijuana and l5 kilograms of cocaine in the United States ... utilising even the most conservative wholesale values for those narcotics, US$200 per pound of marijuana and US$15,000 per kilogram of cocaine - the gross proceeds from the distribution of those narcotics is well in excess of US$1,500,000," the prosecution successfully argued.

In the meantime, Hinds said local investigators are "actively pursuing every means and opportunity to carry out civil recovery through the civil forfeiture element of POCA."

The senior policeman, however, noted that the process may be lengthy. He related the efforts of the police to seize millions of US dollars found in a refrigerator in Portmore, St Catherine nearly five years ago.

"You will recall that the last major confiscation we had started was four years before it was finally concluded and that was the one with the frozen assets of US$1.5 million which was found in a fridge in Portmore," said Hinds. "It took us five years.

In 2010, the state moved to freeze Coke's assets. At the time, attorney-at-law Paul Beswick accused the Government of attempting to seize the assets without giving the persons a fair chance to defend themselves.

However, Michael Hylton, QC, the attorney leading the case for the Asset Recovery Agency, dismissed the allegations at the time.

The Asset Recovery Agency went to court to freeze the assets of Coke, his mother Patricia Halliburton, his alleged girlfriend, Stephanie Gayle, businessman Justin O'Gilvie and others reportedly linked to the former west Kingston strongman.

The assets of three companies in which Coke is listed as a shareholder, Incomparable Enterprise, Bulls Eye Security and Presidential Click, have also been frozen as the Government attempts to use the Proceeds of Crime Act (POCA) to seize the assets.

Under Section 33 of the POCA, a judge can allow Coke and the others access to their accounts for "reasonable living expenses and reasonable legal expenses", except for the legal bills related to attempts to seize the assets.