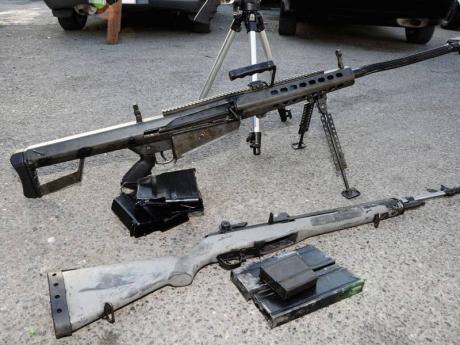 Guns that were found on the old Public Works Department property adjacent to the Tivoli Gardens community. - Ricardo Makyn/Staff Photographer

IT SEEMS every time Rasta City is in the news, it's for the wrong reasons. Two years ago, a bullet-riddled body was found after the Tivoli incursion, prompting further searches close by.

On Saturday, three high-powered weapons were discovered near a house. But The Gleaner spoke with residents on Monday who say the name is the first thing they want to clear up. The area being referred to where the guns were found is really called PWD.

"Rasta City is just up the top there so," said Fluffy, pointing to the red, green and gold painted wall and main building in the same colours, which is essentially the entrance to PWD.

"Dem call it that because whole heap a Rasta used to live up there, cook dem food and hang out," she explained.

She said PWD got its name because the houses are on an old Public Works Department compound. Some of the old buildings which made up the offices are still intact, but in need of repair.

The place was quiet, a far cry from the hubbub mere days before.

No murderers and gunmen

Fluffy was quick to tell us the area, formally known as McKenzie Drive, had running water and they didn't 'bridge' light. PWD residents say they want people to know that in this section of Tivoli, there are no murderers and gunmen living there.

"Police say this is the best place in Tivoli, because everybody gone a dem bed by 9 p.m.," Fluffy boasted. "Di most war you hear bout in here, is man and woman ting. And that is a must everywhere," she said.

Her neighbour Jackiesaid she was not worried people may stigmatise them as wrongdoers.

"Wi nuh feel no way because nutten nah happen to we. If we did know dem (the guns) was there, wi woulda feel a way," she said.

"Dem must not fraid a we," said Fluffy. "Di man dem a do dem work, people can jus come in." Another resident, Petal, was peeved that during the incursion, the media were not allowed to come there "but as dem find nutten, everybody come".

Pointing to land next to the yard where the guns were found, she expressed surprised police found something even though weeks of digging after the incursion produced nothing. They described the man who lives at the house near where the guns were found as "a good man" and while they don't know his every move, they would be surprised if he were involved in any wrongdoing.

The group of women who gathered to speak with us, stressed that though times were rough, the young men we saw playing the ever-popular 'three-card' were working people.