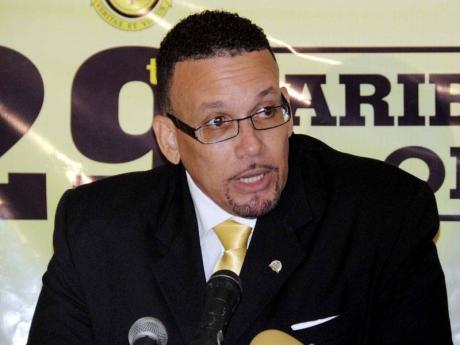 WITH MONTEGO BAY now playing second fiddle to Falmouth as Jamaica's favoured port of entry for cruise operators, Davon Crump, president of the Montego Bay Chamber of Commerce and Industry, believes the resort town's economic viability is at risk.

"As most of you here should know, we are falling behind in the regional markets, as it relates to our share of tourism, which was the city's fastest-growing sector," said Crump, while giving the keynote address at the Rotary Club of Montego Bay Sunrise installation ceremony last weekend.

Speaking against the background of the new policy on taxation, which was unveiled in the recent 2012-13 Budget Debate, the chamber president noted that the drastic decline now taking place is poised to intensify.

"I say this not only in the context of the recent Budget Debate and the effect that the new policy on taxation will have on our ability to remain competitive as a preferred destination," said Crump. "I think the warning signs have been building for years."

The Falmouth Pier, which officially opened in March 2011, has since surpassed Ocho Rios and Montego Bay in popularity, accounting for 264,596 of the 608,610 cruise passengers who arrived in Jamaica between January and April.

According to the records released by the Port Authority of Jamaica (PAJ), of the 195 cruise ships which have docked in Jamaica this year, Ocho Rios leads the way with 72, Falmouth got 69, Montego Bay received 52 and Port Antonio got the other two.

The Falmouth Pier was developed through a partnership between the PAJ and international cruise-shipping firm, Royal Caribbean Cruise Line, which has projected some eight million visitors for the next 10 years.

"The reality is that if we want our fair share of the pie, we have to put our house in order first," said Crump. "We must find creative ways of sustaining a clean and orderly city."

"Yes, Fairview and Ironshore are looking great," added Crump. "... but we cannot be content in the disintegration of downtown Montego Bay, as ultimately it will affect all of us."

During the ceremony, Dayan Ives was elected to replace Mubarek Said as the new president of the Rotary Club of Montego Bay.

In his acceptance speech, Ives endorsed the call for immediate action to save the second city, and listed an asbestos abatement plan; meals on wheels; and a wheelchair project as projects to be addressed during his tenure.