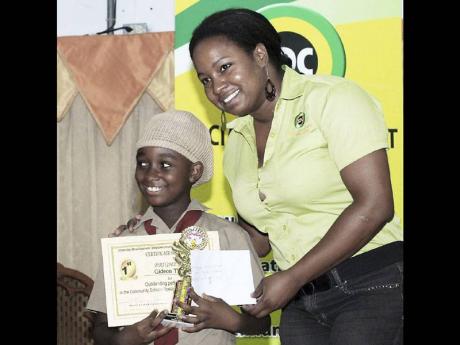 STUDENTS from the early childhood to grade-nine level were in a jovial mood recently as they scurried to collect prizes for participating in Inner City Development Empowerment and Learning's (IDEAL) annual community schools spelling competition.

The prize-giving ceremony was held recently at the New-Testament Church of God, St Andrew.

"The idea for the competition came about because it was difficult to have conversations with children around the community, in areas such as word usage, pronunciation and just having a simple conversation at times, I saw the need to solve this," Marlene Rowe, coordinator for the spelling competition told The Gleaner.

The five-year-old competition has seen rapid growth since inception. It has moved from starting with participants from Waltham Park and surrounding communities to incorporating schools such as Lannaman's Preparatory, among others.

A total of 40 schools, competing across three levels, are involved in the competition.

"I know the confidence and self-esteem are building within the children, that sense of discipline in study, and I must commend the teachers for doing such a great job. We also need more parents on board, one like those of Gideon Thompson from Balcombe Drive Primary and Junior High.

IDEAL gets sponsorship from various organisations, such as Honey Bun Limited, National Commercial Bank, and the Social Development Commission (SDC). SDC has been on board with IDEAL since inception.

"We came on board because of the wide impact of the competition. It meets some of our strategic goals, which include contributing towards the Ministry of Education's aim to increase grade-four literacy," Travis Graham, field supervisor at the SDC, told The Gleaner.

"The competition also has a way for linking the community groups and enhancing their capacity. We will be working with IDEAL to strengthen capacity of the group to ensure the competition is bigger and better next year," Graham added.