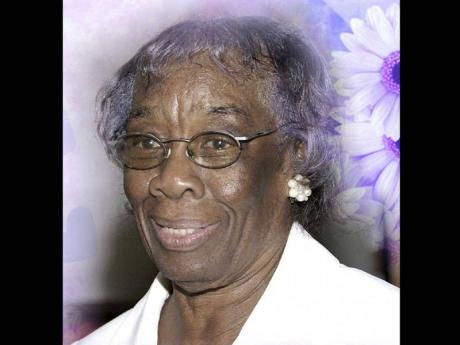 Below are excerpts from a tribute to Eunice Henlin who died recently after she was hit down by a motorcycle.

MRS HENLIN'S journey has come to an end. Oracabessa has lost one who had assumed the figure of a community mother, teacher, friend and counsellor. As a teacher, Mrs Henlin was dedicated in an extraordinary way.

She cared for all children and was never selective in the distribution of her love for them. She gave impartial advice to them and their parents in the same way as she did to her own. A strict disciplinarian, but discipline was always tempered with love and justice. She believed that no child should be denied an education because of financial inability and so she willingly shared her meagre income in assisting needy students who showed potential to excel.

She would also remain after school hours to help those who were very slow and who would otherwise have been lost in the general stream. Many of those students are today holding prominent positions here in Jamaica as well as in countries across the world.

The community of Oracabessa remembers Mrs Henlin as an outstanding Christian giantess whose stature belied her boundless energy. She was involved in every sphere of church and community life. She was the common factor of every church in the community. She demonstrated in no uncertain way that Christianity is a way of life. Through her lifestyle, she preached many sermons as from her veranda and her gate she encouraged, guided, exhorted and even reprimanded those who passed by.

Oasis in the desert

The Henlin's house could be likened to an oasis in the desert. There was where the oppressed or depressed found words of comfort and cheer. She took literally the words of Jesus as recorded in Matthew 25.

There was where she addressed the varying needs of members of the community. She had a keen eye for detecting need and was always quick to respond. Like the widow of Zarephath, she did not withhold her meal and oil, and God blessed her abundantly as she lived a long and fulfilling life. But her caring attitude was not always appreciated. She experienced times of ingratitude and adverse criticism, but that did not deter her, for whenever or wherever an opportunity for sharing and caring arose, she acted knowing that her sole aim was to help others and to give glory to God.

There were times when people wondered if she was not taking things too far. I'll cite one example:

In the wee hours one morning, policemen returning from patrol spotted a youngster leaving Mrs Henlin's yard with lengths of lumber on his shoulder. They stopped him and questioned him. Being dissatisfied with his explanation, they took him to the police station. At day break, Mrs Henlin got a call from the station informing her of what had happened and instructing her to check for any breaking-in, then to come to the station to identify the pieces of lumber. Sure enough her storeroom had been broken into, and lumber was missing. A little later she went to the station carrying a bag. Before she went to look at the lumber, she said to the policeman on duty, "officer, has he had breakfast yet?" In that bag was breakfast that she had prepared for the very one who had invaded the privacy of her home. How many of us women would have done that? Mrs Henlin practised what the Gospel directs:

Do not resist an evil person. Love your enemies and pray for those who hate you.

The presence of Jesus

This is the mettle of which this woman we remember today was made. It was the presence of Jesus in her life that made the impossible possible. Mrs Henlin was a genuine person. She was full of life and laughter. She was loyal to any cause she supported. She was trustworthy, reliable and honest.

The community of Oracabessa has lost a friend and role model. We give thanks to God for the opportunity we had to meet and interact with her. The Bible tells us that all who remain faithful to the end will inherit a crown of life. Mrs Henlin was faithful to the end.

Near to the end of his life, Paul said that it was better to be with Christ than to remain on earth. Yes! Separation is painful, but as Christians, let us not grieve as those without hope. Rather let us rejoice even with tear-filled eyes because our dear friend has taken up a new residence with her Lord.

May her soul continue to rest in peace and may light perpetual shine upon her.