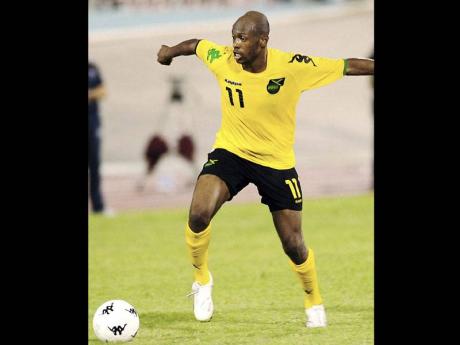 Antigua and Barbuda's Benna Boys and the Reggae Boyz of Jamaica played to a goalless draw in their Group A CONCACAF World Cup Qualifying Semi-final Round football match at the Sir Vivian Richards Stadium last night.

Both teams earned a point from the result. Jamaica, which beat Guatemala 2-1 in their opening match at the National Stadium last Friday, advanced to four points, three more that the Antiguans, who went down 3-1 to the United States in the other Group A match Friday.

At press time last night, Guatemala and the United States were playing their second match.

With the stands almost packed to the rafters in a sea of gold, the colours of the home team, Jamaica had to soak up a lot of pressure in the first 15 minutes from the Benna Boys, who started the game very aggressively.

However, Antigua and Barbuda were constantly dispossessed in the final third as a combination of injudicious plays by their forwards and stellar defence by Jamaica saw the Reggae Boyz defence holding firm.

One of Antigua and Barbuda's best chances came in the 23rd minute when the ball was placed at the feet of striker Peter Byers directly in front of goal and with just the keeper to beat, he tapped gently into the waiting arms of a grateful Dwayne Miller.

Jamaica went close in the 40th minute when a beautiful kick floated cross from JeVaughn Watson forced a diving save from Antigua and Barbuda custodian Molvin James.

Then in the 43rd minute, Antigua and Barbuda's strikers, on a counter-attack, made it to the top of the area when yet again poor finishing saw the Benna Boys' Kieran Murtagh hitting a weak shot to Miller.

In spite of all this, Jamaica's first touches in the first half were excellent and their movement off the ball was superb, so even though the Reggae Boyz were certainly not dominant, they showed some quality.

Antigua and Barbuda started the second half with the same formation they played in the first half, with just one man forward. But Jamaica came out pushing more men forward and started brightly, immediately putting the Antigua and Barbuda defence under pressure.

In the 55th minute Jamaica suffered a scare when Antigua and Barbuda striker Peter Byers broke free from a sea of green and hit a pass across the Jamaica goal, when a sliding save by Demar Phillips almost put the ball into the back of his own net. However, the ball soared just over the crossbar and Jamaica lived to fight another day.

Jamaica, looking the fresher of the two teams, continued to press the attack, keeping the Benna Boys' defence under pressure.

But against the run of play - in the 61st - Antigua and Barbuda missed another sitter. Tamarley 'Ziggy' Thomas, coming down the left flank, beat three defenders and hit a lateral cross and though he was all alone in the six-yard box, Randolph 'Etty' Burton failed to get a touch.

On the ensuing possession Jamaica came within a whisker of scoring when Luton Shelton, after beating his defender with a neat pass off Watson, hit a hard shot from a tight angle at the Antigua and Barbuda goal, only to see the ball crash into the upright.

In the 72nd minute Byers once again beat a Jamaica defender and pulled the trigger, only to see his shot miss the target by a few inches.

As the second half wore on the Reggae Boyz turned up the heat, coming forward in numbers with crisp passing and good ball movement as they looked for a goal that would not come.