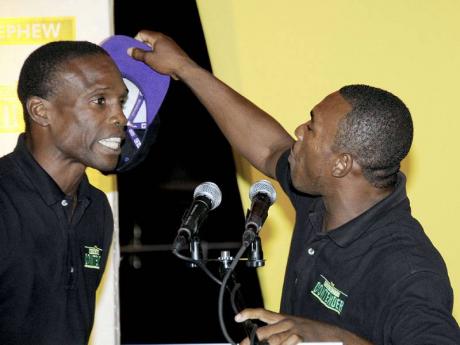 The war of words has ended and tonight it will be fight time for slick, experienced, 43-year- old Donovan 'Police' Campbell and brash, hard-hitting 25-year-old Ramel "Sub Zero" Lewis, who are vying over 10 rounds for the Wray and Nephew Welterweight Contender 2012 title and the million-dollar first prize.

The four-fight card, which will take place at the National Indoor Sports Centre, starts at 8:30 with two amateur bouts.

On February 15, 16 welterweight boxers started the Contender journey in search of the title and prize money totalling nearly $2 million. Apart from the main prize of one million dollars, the runner-up will take home $500,000, third place $250,000 and fourth $200,000.

Richard Holmes, who goes up against Kevin Hylton in the six-round semi-final tonight, finished third and Ian Smith, who was knocked out by Lewis in the second semi-final, placed fourth.

The promoters are MJK Productions. The competition is sanctioned by the Jamaica Boxing Board of Control and the sponsors are J. Wray and Nephew, Foska TVJ. The live television broadcast starts at 9:30.

Campbell, who is the more experienced fighter, has a 15-5-1 record, while Lewis, who just entered the professional ranks, has a 3-0 record.

Campbell made his name as a fit, dogged boxer, who wears down his opponents.

Lewis was a feared puncher as an amateur and he has taken this reputation with him to the professional ranks.

Campbell said this week that he is going in prepared to fight 10 rounds, while Lewis, who predicted a knockout in the semi-final and backed it up, was somewhat hesitant this time around.

"I am fit and ready," he said, adding that "it can end early or go the distance; we shall see."

Both men will quite likely start slowly then pick up the pace gradually, but there is no doubt that Lewis will be trying to take out his opponent. That is just his style. Whether he can score a knockout will be determined by how good Campbell is with his defensive skills. It promises to be an intriguing and crowd-pleasing contest.

In one of the earlier fights Holmes, who must have learnt a lot from his semi-final loss to Campbell, will be tested by the always cagey Hylton, who has been parading his boxing skills in recent fights and has predicted a victory tonight.