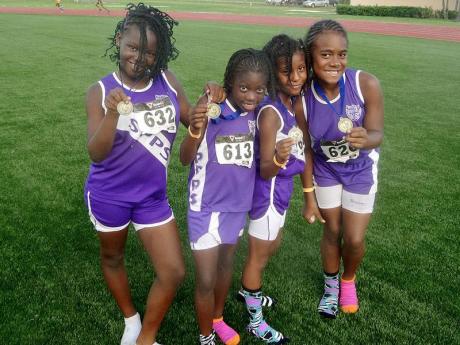 From left: Sts Peter and Paul's Natina Smith, Riana Battick, Sanaa Wong and Alexis Gordon Martin pose after winning the girls 9-10 4x100m relay in 1:07.4 at the Northwest Track and Field Classic in Miami, Florida, on Sunday. - photo by Robert Bailey

Sts Peter and Paul's Prep team of Natina Smith, Sanaa Wong, Riana Battick and Alexis Gordon-Martin brought the Primary and Prep section of the three-day Northwest Track and Field Classic to a close with a gold medal run in the 4x100m last Sunday night at the Traz Powell Stadium in Miami, Florida.

Colin English captured Sts Peter and Paul's first gold medal of the championships, when he won the age 9-10 high jump, while Anissa Walker won silver in the girls 11-12 high jump.

Moore said he was pleased with his team's performance.

"I think my athletes did fairly well," he said. "The condition out there was very hot and I think that this affected the performance of our athletes during the championships."

Saydrian Campbell of St Richards outsprinted his rivals to capture the boys equivalent in 28.71. Ashley Gavin from Whitehall Primary won bronze in the 11-12 200m in 27.58.