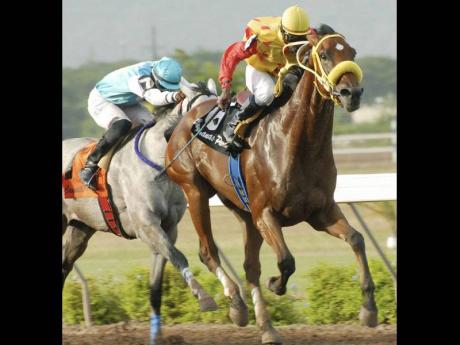 TRADITIONAL PRINCE, running as the 4-5 favourite, is driven out by Paul 'Country' Francis to win the overnight allowance sprint in a driving finish from SIR D (out of pic) and the grey SMOKIN MAN at Caymanas Park on Saturday. The winner, a 4-y-o colt by Traditional out of Princess Lal, is trained by Patrick Lynch. - Colin Hamilton/Freelance Photographer

JET SETTER, who was not beaten far by the out-of-class COMMANDING CHIEF in the recent Hall of Fame Stakes Trophy, should lead home the consistent RED FLAG in today's open allowance race over 1400 metres at Caymanas Park, to be contested by eight starters.

From the stables of champion trainer Wayne DaCosta, JET SETTER, to be ridden by leading jockey Dane Nelson for owner Winston Kong, finished second to TECHNOMOTO in last year's Derby and was second again to SAINT CECELIA in last November's Caribbean Sprint Championship. He definitely has the credentials to win today.

Beaten 33/4 lengths fourth by COMMANDING CHIEF, JET SETTER will relish the additional furlong, and with no apparent out-of-class horse around, should lead home old rivals RED FLAG and DON GEORGE.

The latter found the distance on the sharp side when finishing 41/4 lengths fifth to COMMANDING CHIEF in the Hall of Fame Stakes Trophy and, like JET SETTER, will welcome the extended trip.

But while the Gary Subratie-trained DON GEORGE is an obvious danger to JET SETTER, a bigger danger must be the Owen Sharpe-trained RED FLAG, who has won two of his last three races and only lost the other by a short head to SWEET TRAIL.

JET SETTER actually holds a victory over RED FLAG in December of last year, beating him into second place by 13/4 lengths over 1600 metres. On that occasion, RED FLAG was allowing JET SETTER 1.0kg. Today, he is in receipt of 5.0kg, sufficient to turn the tables. Hence, a close finish is anticipated between them, with JET SETTER and Nelson given the edge.

Elsewhere on the programme, the course specialist SARAGOSSA should foil the hat-trick bid of fleet-footed MR. SKILL when they meet in the opening race over the straight five course for high claimers.

The Anthony Nunes-trained 4-y-o colt has notched three of his last four wins over the straight, beating horses of the calibre of EMPEROR HALL, PALACE GOLD and NEW KINGSTON in better company.

Although scratched out of his last race on May 23, due to lameness, SARAGOSSA reports in good condition and should pack too many guns for MR. SKILL and the recent course winner DIABOLICAL KID in a field of seven.

Incidentally, SARAGOSSA will be ridden by Shane Ellis, replacing champion and stable jockey Dick Cardenas, who flies out today for Barbabos where he will ride in Saturday's Guineas for top trainer Andrew Nunes (brother of Anthony) at the Garrison Savannah racetrack.

Other firm fancies are the maiden 3-y-o colt TOMMY TSUNAMI to lead old PASADOBLE and FEELINGINTHESLIPS in the Dr David 'Jack' Radix Memorial Cup over 1820 metres for $180,00 claimers, BURNING MEDIC in the Jockeys' Training School Race, which introduces the apprentice trainees to race-riding; KAL KAL in the second and RHINESTONE COWBOY in the third.