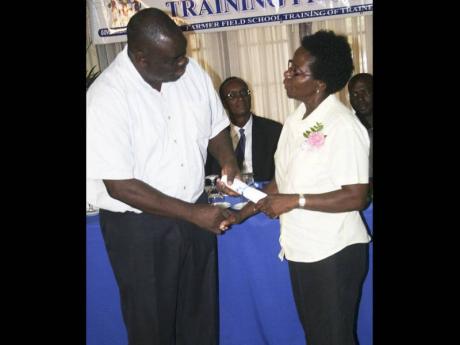 Donovan Stanberry, permanent secretary in the Ministry of Agriculture and Fisheries, has encouraging words for Bev Lattibeaudiere while presenting her certificate at the recent Farm Field School graduation ceremony at Alhambra Inn, St Andrew.

DESCRIBING HERSELF as a new farmer, Bev Lattibeaudiere was among the first batch to graduate from the Farm Field School training programme on Tuesday, June 5, which included participants from Yallahs, St Thomas, New Forest Duff House in Manchester, and Colbeck, St Catherine.

Now trainers, they will share the knowledge imparted by experts in various fields of agriculture over a three-week training period, having been challenged by Agriculture Minister Roger Clarke to "take the message to other farmers" during their graduation ceremony at the Alhambra Inn, St Andrew.

It is a charge Lattibeaudiere is looking to take seriously as she continues her farming pursuit, with the aim of doing things somewhat differently.

She told AgroGleaner: "We always have this idea that, as farmers, we know how to do these things, put a seed in the ground and it comes out. However, the difference (now) is in knowing how to use water properly, in a less wasteful manner, producing more crops in the long run. It's also cheaper for you, the farmer, if you are buying your water."

Old topics such as fertiliser use with a new twist were among the areas covered in the sessions which took place in the fields where the farmers were able to witness the impact of the new techniques first-hand. Lattibeaudiere, who has a five-acre farm in Phillipsfield, St Thomas, summed up the training course this way: "The Farm Field School is all about teaching old heads new ideas."

A retired registered nurse who spent her adult life in England, she returned to Jamaica four years ago and decided to put some of the family land to good use. "I decided for some unknown reason that I wanted to farm. The land was just lying there and I've always liked growing things. So I decided to potter about in the field and grow various crops, and so that's how it started," Lattibeaudiere related.

Since then, she has become a registered farmer and has surprised herself by how she has adapted to and excelled at this new profession.

One important lesson sticks in her mind and guides her farming activities: "The need to look at farming as a business, as opposed to planting something and, if the crop comes up, it comes; and if it doesn't, we've lost."

In addition to cucumber, watermelon, tomatoes, sweet pepper, beans, the retired registered nurse will now be going into pumpkins. She is optimistic that, with the knowledge gained at Farm Field School, her crops will be doing much better.