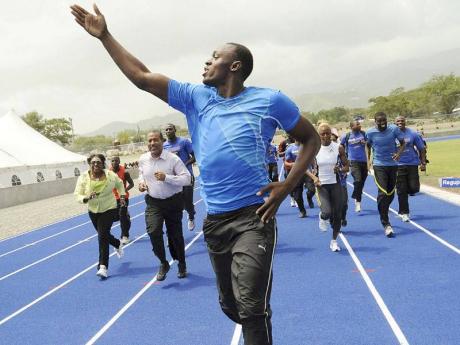 THE NATIONAL preparations for the big days of 2012 ought to have already begun in earnest. Many of those who, in business terms, intend to make the most of 2012 have both the goods and services in place. Some are already in London preparing to make a killing from the Olympics in London 2012. Others are making ready to supply Jamaican cuisine, attractions and events for Jamaica 2012, the 50th anniversary of our political Independence and the bumper crowds of visitors to the island that are anticipated. The question is, who prepares the national spirit for those events, in order to make our celebration meaningful and our outcomes impactful?

A recent newspaper article in which Deputy Commissioner of Police (DCP) Glenmore Hinds was quoted as declaring that the law applies to Usain Bolt also (my words), as "no one is above the law", has raised the issue of the readiness of the national spirit, without setting out to do so. The comments attributed to DCP Hinds were juxtaposed against the recent minor motor vehicle accident in which international sporting icon and Jamaica's sprint sensation, double world record holder Usain Bolt, ran his BMW into guard rails at Half-Way Tree.

To begin with, we must remind ourselves that had it not been celebrity Usain Bolt, we would not know anything about the fender bender. All of us would look like feckless, reckless drivers if our every fender bender were emblazoned on the front pages of newspapers. We should also acknowledge that DCP Glenmore Hinds was responding hypothetically and was not issuing threats of handcuffs to Usain Bolt.

However, the newspaper article does, in its own way, call attention to our collective anxiety concerning Usain Bolt and all of our athletes in the run-up to London 2012. The Jamaican people are so anxious that we forget that the athletes are entitled to their lives off the track.

Our anxiety about Bolt and the safety of all our athletes often betrays the inner conflict within ourselves in relation to two opposite strains of emotions within us.

On the one hand, there are all the elements of an emerging celebrity/fan culture in Jamaica. We now have in Bolt, and others among us and from among us, persons who are household names across the globe.

In Europe, sporting icons are mobbed by adoring fans and the red carpet is rolled out for them. Jamaica is developing a fledgling fan culture and has its own ways of idolising, pouring accolades and generally becoming fanatics. The issue is, will we develop our own paparazzi and, as with Princess Diana, hasten the demise of those we adore?

Perverse record in our past

On the other hand, there is a perverse record in our Jamaican past and a knee-jerk tendency that crucifies or, worse, hangs our heroes and heroines. It is the case that all except two of our national heroes were prosecuted as criminals. Norman Manley and Nanny were not prosecuted and Marcus Garvey was prosecuted in the USA, though in his lifetime he was the object of odium, ridicule and contempt in Jamaica. There is a culture that relishes slaying giants and cutting down to size those we think are allowing their success to get to their proverbial heads. It is for good reason that the Bible says that a prophet is not without honour, except in his own country.

The London Olympics 2012 is important to us for the usual reasons, but especially important because it coincides with the celebration of Jamaica's 50th anniversary of gaining political Independence from Britain. It is understandable that we are anxious that our men and women in athletics and all other competitions remain world beaters, as well as showcase our maturity as a people from the Caribbean region. It is also important that we put on display the best of Jamaica's goods and services, in order to stimulate and facilitate even greater market penetration in Europe and beyond to the enormous social and economic advantage of our people both here and in the diaspora. However, it is important that such anxiety to do well be tempered by a reality check.

One aspect of the reality has to do with grasping the depth of the international economic recession. The other aspect has to do with the fact that we ought not to underestimate how formidable the competition is at the Olympics.

The Olympics produces stars, it does not merely confirm those who are already stars. Unfortunately, all our athletes are already well known and the competition has them in their sights. Many of those who will represent us at this Olympics represented us at the last Olympics and are, therefore, well known internationally. Bolt is acknowledged as a breed apart. It is not only so to us in Jamaica, but it is also that sports lovers and watchers the world over want to see him do well.

In particular, there is a view, in England anyway, that Usain Bolt approximates the apex of human athletic prowess in sprint. London, it is hoped, will be merely the stage on which Bolt is pushed to his limits so that he exceeds all existing measures. It is our hope for times in 9.40s in the 100 metres, and sub-19 seconds in the 200. It is not just about gold medals and it is not just about world records, it is about the level of human genius.