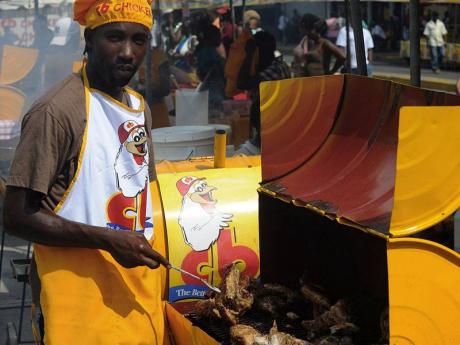 As Jamaica prepares to recognise its golden jubilee anniversary, the country will be celebrating the many components that shape its rich cultural heritage, including our rhythmic music, our highly expressive language, our engaging storytelling and, of course, our delectable cuisine. Since food plays such an integral role in our social fabric, ackee and salt fish, callaloo, breadfruit, fish and festival, and the irresistible pan chicken are all important elements in Jamaican life. Pan chicken's authentic representation of who we are as a people has become a vital element of 'Brand Jamaica', having attained a strong local and international following. Additionally, the island's pan chicken industry has become a key sector for developing budding entrepreneurs, and an enticing draw for tourists looking to sample the country's tantalising flavours.

We have our ancestors, the Arawaks, to thank for developing and perfecting this unique, food-smoking method. The country's first inhabitants would roast meat over a pimento wood fire, a technique that produced a distinct taste. Later, in the 1960s, progressive entrepreneurs developed a portable means to recreate this mouth-watering flavour. They utilised old oil barrel drums that they split in half, attached hinges and drilled in holes for proper air ventilation.

Today, drums are a familiar fixture on busy thoroughfares such as Red Hills Road and in popular food haunts in Faith's Pen, St Ann, and Boston, Portland. Additionally, the diaspora has been credited with introducing pan chicken to the United States, Canada and the United Kingdom.

"Although almost exclusively associated with jerk products, 'pan' is actually a cooking technique that can be utilised to prepare meats with a range of condiments and spices," said Kimberley Mullings, brand manager at CB Chicken. "We've seen pan chicken chefs create some truly unique recipes, including peanut butter and tamarind sauces," she concluded.

In celebration of pan chicken and the important cultural role it plays within Jamaican society, Caribbean Broilers will be hosting its CB Pan Chicken Championship, an exciting food contest staged annually in search of the island's most talented and creative pan chicken chef. CB is currently gearing up for its Western Regional Eliminations, which is scheduled to take place on Saturday, June 30 on the pristine, white sands of Dump-Up Beach in Montego Bay from 10 a.m.-5 p.m.

Competitors from Hanover, St Ann, St James, Trelawny and Westmoreland will go head-to-head in a bid to determine the 'best pan chef in the west'. Two finalists will be selected from each parish, with first and second place winners walking away with $30,000 and $15,000 in cash prizes, respectively. The selected chefs will then go on to compete in the finals, which is slated to take place on the beautiful waterfront in downtown Kingston on Sunday, November 18. In addition to bragging rights, the Grand Champion will receive prizes valued at $525,000, including $275,000 from CB, business seed money of $250,000, courtesy of Churches Co-operative Credit Union, and a trophy.

Guests at the Western Regional Eliminations will be treated to the island's tastiest pan chicken prepared by more than 30 competitors, exciting performances by top local artistes, a Kiddies Village with fun rides, and plenty of prizes and surprises. The event is a great outing for families looking for a relaxed and fun atmosphere with a wide range of entertainment options that everyone can enjoy. The Western Regional Eliminations is free and open to the public with food and drinks on sale.