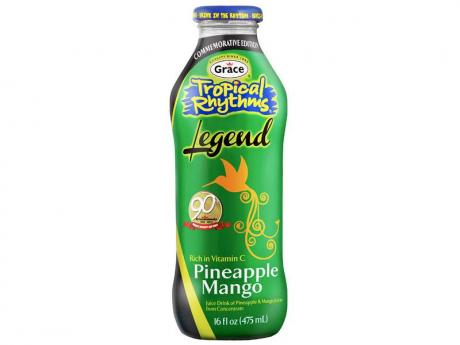 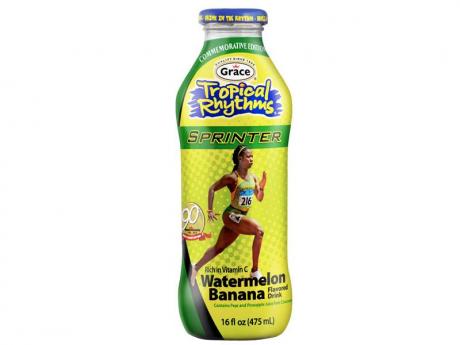 Two exciting new flavours of Tropical Rhythms are set to cool down temperatures in Jamaica this summer while stimulating the tastebuds with bursts of excitement.

The two commemorative editions of Tropical Rhythms, 'Legend' and 'Sprinter', were launched at the recent Penn Relays in celebration of Jamaica's many legends as well as Grace-Kennedy's 90th anniversary; and to honour Jamaica's world-class performance in athletics. Best served chilled, "Legend" ripples with a tangy pineapple and mango flavour, while 'Sprinter' bursts with an extra fruity taste from the unusual combination of watermelon and banana, comple-mented by an enticing aroma.

The new flavours have no preservatives and are rich in Vitamin C. They are sold in special collectors' bottles that are also being used to mark 50 years of Jamaica's Independence. So when you're through savouring the taste, there is another reason to keep the bottle close. The commemorative editions can be found at retail outlets islandwide, but are not limited to Jamaica, so members of the diaspora and Jamaicans at heart can purchase the new flavours in the Caribbean, as well as the United States of America. Additionally, for every purchase of any of the two flavours, Grace Foods will donate 10 cents to the Jamaica Athletics Administrative Association (JAAA) for the development of athletics islandwide.

"This year is unique in so many ways for us at Grace Foods, and for Jamaica as a country, so we felt obligated to do something outstanding, not just for the moment, but something that Jamaicans the world over could have to reflect upon as the years go by," commented Tania Christie, marketing manager, Grace Foods and Services. "Tropical Rhythms provided that opportunity with two unique flavours in bottles that exhibit the Jamaican colours. We know both flavours will make great gifts," she added.

'Legend' comes in a bottle that is predominantly green, but features yellow and black and an image of the Doctor Bird. The 'Sprinter' bottle is predominantly yellow, with green and black from the national colours featuring a picture of Shelly-Ann Fraser-Pryce, reigning women's 100m Olympic Champion and Grace Foods' ambassador. Fraser-Pryce expressed much enthusiasm about the flavours. "I've always loved Tropical Rhythms, and the two flavours stand out with their unique colours and taste. Knowing that this year is so special, I feel extre-mely proud to be associated with the commemorative editions. I applaud Grace for taking the initiative to celebrate us as athletes and as a country".