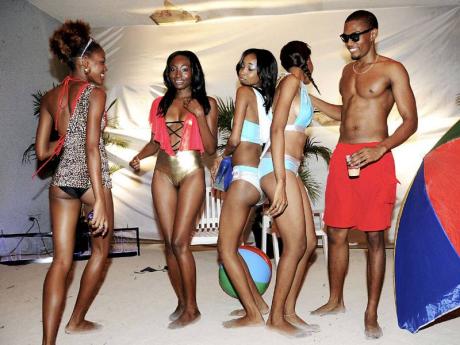 These models created the atmosphere patrons can expect at Appleton Temptation Isle 2012. 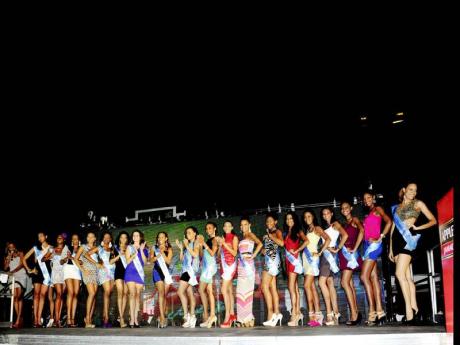 Miss Jamaica World 2012 contestants were introduced to an audience at the launch of Appleton Temptation Isle at the Ministry of Health complex, King Street, on Tuesday night. - photos by Winston Sill/Freelance Photographer
1
2

Anticipation surrounding the forthcoming Appleton Temptation Isle (ATI) party weekend was evident as the event was launched at 2-4 King Street on Tuesday night.

After a creative presentation of the various promoters and their associated events, slated for the August 3-6 festivities, a colourful fireworks display painted the night sky. Cheers, interspersed with the odd ooh and ahh, rang out as all looked on in awe.

The annual event that takes place in Negril, Westmoreland, has been recognised as an official Jamaica50 celebratory event.

The recognition has made Absolute Entertainment's Alex Chin, the man who conceptualised ATI in 2001, extremely proud.

"What ATI has become, it's a party mecca for partygoers. It's a once-a-year event that people look forward to and, being something that I started, whether people want to copy it or do whatever they want to do to it, I feel great that Jamaica 50 looked at Absolute Entertainment and the whole ATI team and said we want to be a part of you. We're not just endorsing you; we want to partner with you, because we see what you've done," he said.

Upon purchase of a season-band, one is issued a loyalty card that can be used to get discounts at 'ATI hot spots' such as Pier One, Spartan Health Club and Truck Stop in Jamaica and Miami and clothing stores in Jamaica.

Two lucky season-band holders will also be given the opportunity of winning a brand-new Honda CBR 600.

Chin told The Gleaner that the new features were simply a way of presenting a different experience to ATI patrons while rewarding them for their loyalty and providing a sample of the fun to expect in Negril.

"One of the things we're bringing to the table is the new youth and young energy to the whole promoter line-up. We've teamed up with Miss Jamaica World and we have the ATI hot spots with the loyalty cards. What we're trying to do is to give the patrons so much that, when you come to Negril, it's just a different experience that you're coming to," he said.

Appleton's Gary Dixon also explained that, in coming weeks, there would be even more new ATI features revealed.

"What we're gonna do is that, over the next couple weeks, we'll be introducing a lot more of what will be happening in Negril. We thought about this and we said the fun must start before you reach Negril. So just look out," he said.

"It's Jamaica 50 so we're gonna definitely celebrate that. ATI has been around for a couple years and is still the number-one party series, probably in the hemisphere. We're adding new energy, new promoters, and younger people to it, and Appleton is committed to renewing its focus on ATI. You come to Negril, it's gonna be an awesome experience."

This staging of ATI will feature the events Naked, Wildsides, Colours, Stages, Oficially Diagnosed, and newcomers, The Official and Original Water Party and Mariposa.

Early-bird season bands for the weekend were recently released and are available at select locations islandwide for $13,000.

On Friday at 9 p.m., a Miss Jamaica World ATI competition will be held at the Spartan Health Club Wellness Centre.