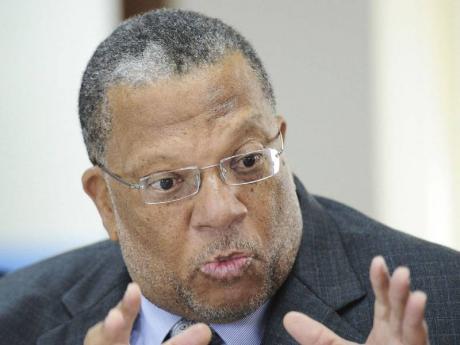 
FINANCE MINISTER Dr Peter Phillips is downplaying the possible impact an opinion from the Attorney General's Department could have on Jamaica's ability to ink a new agreement with the International Monetary Fund (IMF).

The Attorney General's Department, in a legal opinion, has said proposals for pension reforms now being considered by Parliament are in breach of the workers' contract with the Government.

Asked yesterday how the legal opinion could impact the Government's approach to the IMF, Phillips said, "Don't jump too far ahead ... . The committee to come out with a report is the first part."

Pension reform was a critical plank of the country's last agreement with the IMF. The Government's failure to implement the reform led to the country's inability to draw down on funds from the multilateral institution.

In opening the 2012-2013 Budget Debate, Phillips said pension reform was a critical part of the country's economic survival.

"We will not achieve fiscal sustainability without it," Phillips said.

The Government's senior legal adviser's opinion was revealed yesterday during a meeting of the Joint Select Committee on Public Sector Pension Reform.

Senator Arthur Williams, who previously chaired the committee, described the opinion as a bombshell.

He, however, said a minister of government advised him that he received a legal opinion from a Queen's Counsel which was in contrast to that of the Attorney General's Department.

"So now, although this is the official opinion coming from the Government's legal adviser, the fact is that there is another opinion that is diametrically opposed to this one," Williams pointed out.

Senator Williams told the committee that the opinion was requested in November 2011 after questions were raised during the committee's deliberation.

Obviously stunned by the legal opinion, committee Chairman Horace Dalley said if the opinion was "correct, then we might well end the proceedings of the joint select committee, which we do not intend to abort."

The Attorney General's Department advised that upon examination of the applicable legislation, proposed amendments contained in the Government's Green Paper on pension reform would be in breach of the terms of the contract of employment between the Government and its employees.

"The terms and conditions of this contract were granted at the time of their employment and are secured by legislation. Accordingly, the proposed amendments will be a breach of both the terms of the contract as well as the said legislation," the legal opinion said.

The Government's Green Paper on pension reform propose changes to the existing pension arrangements by introducing a five per cent contribution rate, an increase in the retirement age, a change in the format used to calculate benefit to the average of the final five years' salary, and an adjustment of the benefit formula, which will cause a reduction in the pension benefits provided to such employees on retirement.

In the meantime, Dalley, who is also minister without portfolio in the Ministry of Finance, advised that the committee would be inviting a representative from the Attorney General's Department to appear before the committee next week.

Members of the committee also enquired whether the unnamed lawyer would make his opinion available to the committee.

Williams suggested that the lawyer would be approached to see whether he would also appear before the committee.

"In those circumstances, I suggest that a way has to be found to determine what is likely to be the legal position and it may be that we may have to consider approaching the court for the court to give some opinion when we are in a position where we have two completely opposing legal positions," Williams added.

"If this one is right, then the country has a problem," Williams concluded.

The legal opinion dated June 8 was sent to the financial secretary, Dr Wesley Hughes, who told The Gleaner yesterday that he had not yet perused the document.

In the meantime, Phillips said the comments "will have to be considered, reviewed, then once the committee has reported, a policy document will have to be prepared before any implementation can go forward.

"These were a set of proposals. No doubt the proposals will have to be adjusted before they go forward," Phillips said.

Pensions are currently paid from the Consolidated Fund and are expected to cost $24.1 billion this year.

Phillips had told Parliament that the Government is hoping to begin the implementation of pension reform this year.