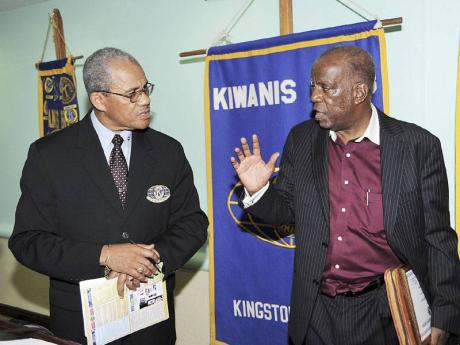 Dr Henley Morgan (right) guest speaker at the Kiwanis Club of Kingston's weekly luncheon, in discussion with Clive Heslop, president-elect of the club, following a luncheon which was held on Tuesday at the Wyndham Hotel in St Andrew. - Ian Allen/Photographer

"THE BEST thing that you can give to any young man is hope."

That's the opinion of noted social commentator Dr Henley Morgan as he 'reasoned' with members and guests of the Kiwanis Club of Kingston on Tuesday. Morgan, who is executive chairman and overseer of the Praise City International Transformation Centre, which works effectively with youth in Trench Town, was speaking on a topic he knows much about - young men at risk.

Pulling from his various interactions with men at his Trench Town-based business and church, Morgan talked about the four Gs that keep men down; "guns, gangs, gals and ganja".

"It (the gun) is really the god (to them), because when you have a gun you don't even have to pray to God. With a gun, you can get anything you want," he said. Morgan told the gathering that Ishmael Beah, a former child soldier, once looked at Trench Town and said, in some ways, the young men mirrored the child soldiers he knew well.

"And extrapolating from Trench Town, there are between 22,000 and 32,000 of these young men in our country," said Morgan. "When you reach this stage, it takes institutionalised rehabilitation."

He said part of his success in reaching troubled youth was his ability to look the part, so they could connect with him. He noted that many of the men felt they can't be a 'soldier' and love their women and children, something he has had to hammer out of their psyche.

"I have been able, especially with my two kids, to demonstrate (love outwardly). When I got there (Trench Town), things like picking up your son and just hugging and kissing him just wasn't done," he recalled. His church's mission statement speaks to ministering to growing numbers of men and their families. He also noted they do much self-esteem building, and offer social entrepreneurship lessons in areas men showed an interest in such as greenhouse farming.

"These are things that will allow the men who are marginalised (to participate). When you start to move on that plane, the men begin to take note." He admitted that replicating the 'Trench Town model' may not work for the entire Jamaica and opined that there were still too many guns, too much hunger and great inequality. But he expressed hope for the future.

"You cannot solve a problem at the same level of thinking that ... you were at when you created it," he said. He urged the club members not to think of New Kingston and Barbican as Jamaica, as the problem was not just "below Cross Roads".

"Look in your own households, have a conversation with that son of yours. The problem is not just down there."