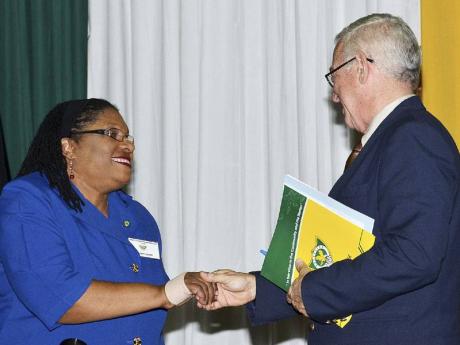 Ronald Thwaites (right), minister of education is greeted by Dr Nadine Scott, principal of the Excelsior Community College, when he arrived at the Jamaica Conference Centre in Kingston on Tuesday to participate in the college's Staff Development Retreat. - CONTRIBUTED

PERSONS WHO drop out of high school may soon have the opportunity to earn their high-school diploma.

This was revealed by Minister of Education Ronald Thwaites, during an address at the Excelsior Community College's Staff Development Retreat, held at the Jamaica Conference Centre in Kingston on Tuesday.

"Anyone who doesn't have a high-school diploma in Jamaica is going to be able to get one, at their pace and without considerable cost," the minister said.

He informed that the e-Learning Project, the Jamaica Library Service and the Jamaican Foundation for Lifelong Learning will be partnering to allow any individual to "come to a library and designated centres not far from their places of abode, anywhere in the island, and be invited and encouraged to pick up from where they are to where they need to go."

"The girl who had to leave high school at 15, because something happened, must come back to get her high-school diploma. The boy who, through whatever rudeness or disciplinary problem, dropped out and finds himself at the dead end for employment, must be able to come back," the minister emphasised.

Thwaites said this move was in keeping with the dream of the late former Prime Minister Michael Manley, who advocated for universal literacy in 1973/74. He said this vision, while it must be re-emphasised, must also be extended, "because just the ability to read and write is not going to be enough anymore."

"You have to have literacy and numeracy, but you must also have information technology, you must also have social studies, and you must have some basic understanding of science, because the 21st century is a scientific age, but it must be available to all," the minister said.

Thwaites said he would provide further details on the arrangement, at a later date.

The two-day retreat was held under the theme: 'Jamaica 50: ECC Rising to the Challenges of the Changing Tertiary Education Landscape'.