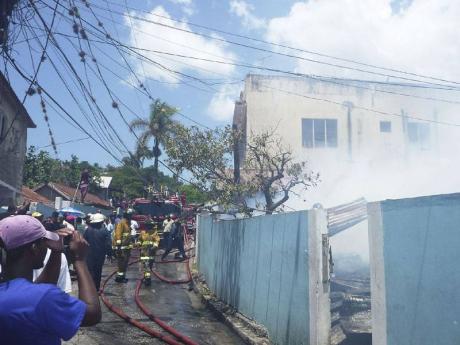 Residents of Love Lane in Montego Bay, St James, look on as firefighters perform cooling-down operations at the scene of a fire in the area on Tuesday. - PHOTO BY CHRISTOPHER THOMAS

FOURTEEN PERSONS from three families are now homeless following a fire, believed to be arson that destroyed their homes along Love Lane in the North Gully community of downtown Montego Bay on Tuesday.

One of the affected residents, Ferlina Sawyers, said she lost several valuables in the blaze which consumed her four-bedroom dwelling.

Sawyers' house and two others were completely gutted in the fire which began about 12:45 p.m. A nearby shop was also damaged by the blaze.

"Mi have $20,000, my TV, dresser, whatnot, fridge, and three beds, and all of my clothes and shoes. Everything gone now. Only this alone mi have now," Sawyers said tearfully, pointing to the clothes she was wearing.

The distraught woman told The Gleaner that she was away on the nearby St James Street plying her wares when disaster struck. Sawyers added that she did not suspect an electrical shortage as the cause because she had not left any appliances plugged in.

"Everything did plug out, nothing nuh plug in. Mi have no idea how the fire start."

However, another resident, who only identified himself as 'Tony', expressed suspicion shared by neighbours that a particular individual may be responsible for the fire.

"A two times now mi save di place and mek it nuh burn down," he stated. "The last two times, mi inna di house and mi smell smoke. A mi affi run out and save the place."

People's National Party (PNP) councillor for the Montego Bay South division, Suzette Brown, said she will ensure that the affected residents get some assistance.

"Through the parish council, there are resources available for this type of situation, and I intend as councillor to pull on those resources to assist the families in getting on their feet as soon as possible, to alleviate their discomfort," she said.