Warren wearing down the clock 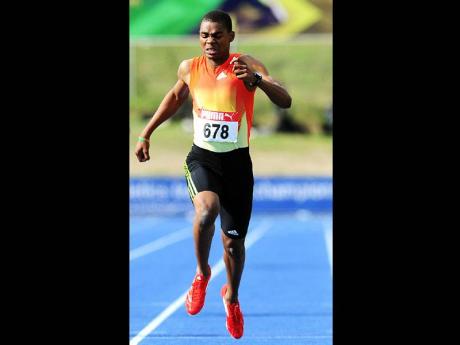 
Fast-rising Jamaican sprinter, Warren Weir, has been hitting new heights every time he steps on to the track.

The Racers Track Club sprint hurdler-turned-200m specialist stopped the clock at 20.08 seconds at last weekend's adidas Grand Prix, the New York Diamond League meeting at Icahn Stadium. And after four lifetime best clockings in his most recent runs, one can't help but think that a sub-20 seconds clocking isn't too far away.

The 23-year-old has, since the start of the year, established new marks of 20.21 at the Jamaica International Invitational on May 5 and 20.13 in the Cayman Islands, before his most recent personal best (PB) in New York.

This is, however, just the beginning for the youngster, who only recently started competing in the half-lap event because of injury issues associated with the 110m hurdles.

"Last year, while training for the hurdles, we (coach and himself) realised that after the hurdling sessions the knees started to hurt, so we decided not to let the season go to waste; to stop hurdling and run some 200 metres instead and it worked out, so that is what I am focusing on for now," said Weir, who has a 110m hurdles PB of 13.65.

"It is so far the best decision. I am very pleased. I got something out of it; I got a lot out of it. In fact, I'm not sure if I would be in the same place if I was doing the hurdles, but it's one of the best decisions I have made so far in my career, along with working with Coach (Glen) Mills," Weir added.

Now in his third year of a contract with German-based sports goods manufacturers adidas, Weir has been fine-tuning his technique over the past few months and is increasingly excited about his potential in an event which, he admits, is one of the most competitive, given Jamaica's wealth of talent over the distance.

"I am pretty excited because last year I came sixth at the national trials with just half season's work with the 200m, and so this year, having gone full out with this event, I should be able to get one of the top three spots. I am very confident that with the help of God, my coach and my family I know I am in striking distance," Weir said.

One thing is certain, working out at Racers with the two fastest 200m athletes in history - world record holder Usain Bolt (19.19) and Yohan Blake (19.26) - has definitely been working to his advantage.

"It's a big boost because you are training with the two fastest men in the world, so when you are out in competition there is nothing or no one to fear because you train with these athletes every day and so you prepare at the highest level," said Weir.

Sub-20 or not, Weir will not go quietly, and with the Jamaica Athletics Administrative Association (JAAA)/Supreme Ventures National Senior Championships just around the bend, the time is ripe for him to scale new heights as he chases his dream of winning an Olympic 200m spot on Jamaica's team.