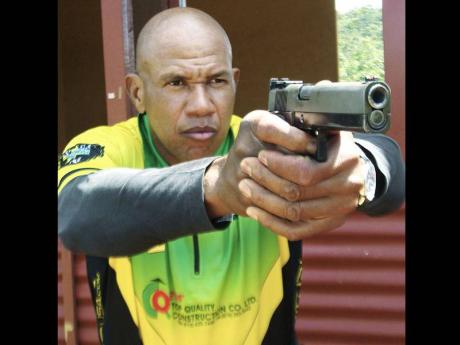 
Jamaican international shooter Orville Henriques shot his way to world recognition after finishing a superb second overall at the Double Tap championship in Texas at the weekend.

The Double Tap championship, hosted at the Double Tap Gun Ranch in Witchita, is the most recent of the sponsored tournaments on the United States Practical Shooting Association calendar.

Henriques, who competed as a Master Class representative of the Manchester Rifle and Pistol Club (MRPC), shot his way to a career-high 95.4 per cent in the Limited Division, the marquee category in the sport.

Henriques credited his latest achievement to a lot of hard work and investment at MRPC.

"This goes back to what I've been doing at MRPC - lots of hours of hard work, sacrifice and practice and taking them on (world best shooters) on their turf."

Henriques' performance was bettered only by American No. 2 shooter Manny Bragg. World Champion and US No. 1 ranked Blake Miguel did not participate.

Henriques, who won four stages out of 12, also placed second and third, but fell down badly to 13th on stage 11, which probably cost him the match. He was faster than all shooters on three stages.

Two months ago at the Area Two championship in Florida, Henriqes emerged as the top overseas shooter, finishing fifth, one place ahead of another local standout, Ron Brown.

His second-place finish betters his previous best of third overall, achieved at the same tournament last year. However, then he broke into the 90s percentage barrier for the second time at 91. It was also the first time that the 95 percentage barrier was broken by a Jamaican in the Limited Division.

At present, there is only one Jamaican shooter, Lesgar Murdoch from the Jamaica Rifle Association, who holds the sports' highest ranking, that of Grand Master. However, this status was achieved in the Open shooting category. An elevation to GM in the Limited Division, however, would be unprecedented for a shooter from the English-speaking Caribbean.