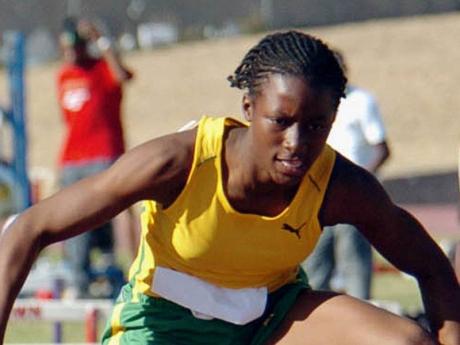 UNDOUBTEDLY, Chrisdale McCarthy of St Jago High has been the country's best female junior hurdler for the past two seasons and, come this Saturday, at the Supreme Ventures Limited Jamaica Athletics Administrative Association National Junior Championships, she will be looking to continue her impressive record on local soil.

McCarthy is down to compete in the girl's Under-20 100-metre hurdles as she seeks to be one of two representatives for Jamaica at the World Junior Championships in Spain next month.

After a lean spell since winning in Class Four at Boys and Girls' Champs several years ago, she bounced back to good form last year and dominated, scoring a big victory over her main rival Megan Simmonds, of St Andrew High, in Class Two.

Both Simmonds and herself have had some close finishes and both represented the country at the World Youth Championships in France last year, where McCarthy placed fifth in the final, just ahead of Simmonds, who was sixth.

McCarthy has been unbeaten all season on local soil, with her only defeat coming overseas at the Carifta Games, where she lost by one hundred of a second to Barbados' Sade Mariel Greenidge.

McCarthy and Simmonds are set to continue their rivalry once again and, although being upstaged by McCarthy all season, the fast-starting, pint-sized Simmonds, who was plagued by injury earlier this season, has recovered well and will be very competitive this time around, as she looks to put her fourth-place finish in the Class One event at Champs behind her.

The event will not be about these two, as there are two other ahletes who could spring a surprise - Edwin Allen's Keenan Davis and former St Jago hurdler, Samantha Scarlett, who is a freshman at Auburn University in the United States.

Davis, who represented the country at the World Youth Championships in the event in 2009, is back to form and only lost narrowly at Champs to McCarthy in a photo finish.

Scarlett, who was a dominant hurdler for two years at Bethel High in the United States and who has done quite well in her first season at Auburn University, will want to make up for her disappointment at the World Youth trials in 2009, where she had a commanding lead over a quality field that included the likes of Samantha Elliott, McCarthy and Davis, before hitting the penultimate barrier, which cost her the event.