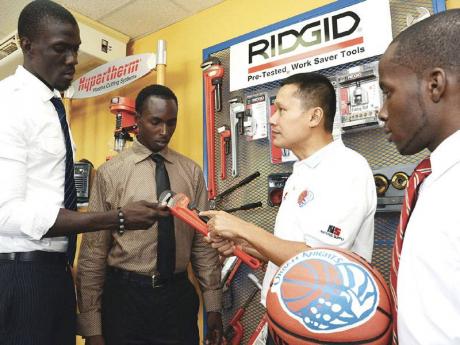 Donovan Chen See (second right), director of sales, National Supply Company, gives a lesson on the history of the monkey wrench, also known as a rigid wrench, to Urban Knights Basketball Club team members (from left) Oneil Mundle, Tommy McDonald and Rolston Gordon. The team was on a recent visit to National Supply, which has been a dedicated sponsor of the team for over 12 years. - Contributed

FORMER champions St Georges Slayers will be hoping to put a dent into Majesty Gardens Legends' nine-game win streak when both teams clash in today's feature game of the Flow/National Basketball League (NBL) at the National Stadium courts, starting at 7:45 p.m.

The match is the first of a double-header, with the Jamaica Defence Force opposing Swift Sons in the opening game at 6 p.m.

The Rohan Robinson-coached Slayers, who last won the title in 2006, will enter today's encounter on a six-game winning streak. They are currently fourth in the standings with eight wins and three defeats.

Robinson is expecting a tough game and says his team must prevent Legends' sharpshooters from converting easy baskets.

"We will have to play team defence in order for us to stop them from extending their winning streak," said Robinson.

"We also going to have to make sure that we prevent their top shooters from scoring freely against us, because if we are unable to do this then we might end up on the losing end," Robinson said.

He added: "We have been playing well this season because we have won our last six games and therefore we would like to continue this as well."

The Slayers will be depending on centre Damion Young and shooting guard Paul Oliphant, who both represented Legends last season, along with guard Leon Chung and small forward Michael Jackson.

On the other hand, the Legends, who are seeking their first hold on the trophy, have been in excellent form this season and lead the standings after nine wins and two defeats.

Ludlow Barker, coach of the Legends, is confident of victory.

"We are expecting a tough game from Slayers," said Barker. "However, my team has been playing confident basketball this season and so we are ready to maintain our winning streak."

Barker added: "I believe that we have best shooters in this competition, and once these players get going then it is going to be difficult for our opponents to stop us from winning the game."

The Legends will be depending heavily on their captain, Baldon Todd, who is the leading scorer in the competition this season. He is expected to receive main support from Havando Dunn, Ataina McClennon and Steven Rockwood.