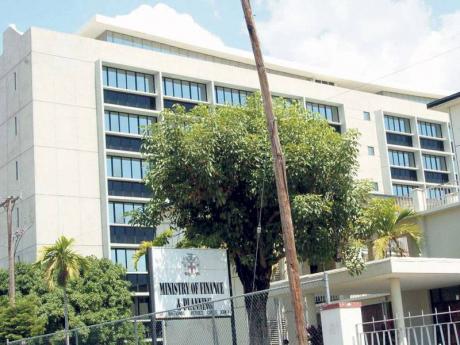 Ministry of Finance and Planning

The Ministry of Finance and Planning has been talking quietly to dealers and analysts to tamp down on concerns among bondholders who have grown nervous about the payout of the €200-million bond which matures in July.

Jamaica is facing the equivalent of about a J$25-billion payout to external and other creditors when the bond becomes due.

Jitters about payment began emerging, traders said, after recent statements by Finance Minister Dr Peter Phillips were read as a signal that he would not return to the international market to raise new funds until Jamaica has made progress on a new International Monetary Fund (IMF) agreement.

International creditors, according to one analyst, were thrown by the signal and read it as intent by the finance ministry to cover the bond by tapping the country's falling reserves.

However, a highly placed source inside the finance ministry has dismissed the idea, saying the resources to pay bondholders have already been identified and that "it won't have a major impact on the reserves".

The May report from Bank of Jamaica disclosed another drop in the NIR by US$53 million to US$1.71 billion within that month.

"The market should know we are not twiddling our thumbs," said the source. "We have contingencies in place; we plan ahead."

The finance ministry has acknowledged that there is nervousness in the market, but says it is confident that the bond will be paid in full and on time. It refuses, however, to identify the source of the funds.

Jamaica is negotiating a new agreement with the IMF after the first was derailed less than a year into the 27-month programme.

Phillips has indicated that a new agreement is unlikely before October or November, which the market believes will limit the debt-raising efforts of the Government unless the IMF were "to endorse" its floats in the interim, said the head of one securities dealership.

If that happens, it would be a signal of confidence to investors and the ministry would likely find a ready market among investors yearning for yields above the average one per cent they are now getting.

"If we get that IMF endorsement, this all blows over," he said. Otherwise, Jamaica will tap the reserves to cover the bill if the cash is unavailable from other sources, he said, because the country just does not welsh on its foreign obligations.

Traders polled by the Financial Gleaner said the Government could just as easily raise the funds it needs from the domestic market which is so flush with liquidity that some dealers are refusing cash in the repo market.

JMMB's senior trader, Kwame Brooks, says there have been assurances that the funds are available to pay down the bond, but not the source from which it will be tapped.

But even if the ministry does not have the funds at hand, it could easily raise capital by reopening the 2016 bond, he said.

The ministry is amenable to reopening existing JDX instruments, but the plan is being held up by "minor technical glitches" at the central bank, said our source.

The IMF is also said to be amenable to the idea. Its June 7 Public Information Notice suggests that Jamaica implement "an improved debt strategy".

"They are saying go to the market more often with more instruments," said the finance official. "They're also saying to hold more auctions."

The ministry is said to be leaving the central bank to work out the latter issue, but expects that the frequency of the auctions will be worked out with securities dealers.