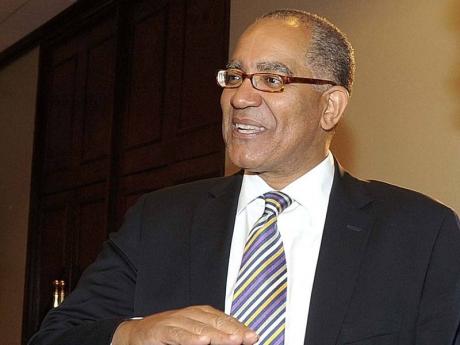 The Bank of Jamaica (BOJ) has revised its forecast for prices for the fiscal year, and is predicting the country will return to double-digit inflation due to tax measures in the budget.

Inflation for the June quarter is now projected to be in the range of 3-5 per cent, double the 1.5 to 2.5 per cent initially forecast by the central bank, and is directly attributable to the new and adjusted taxes falling under the new General Consumption Tax (GCT) regime announced during the Budget Debate.

Inflation is expected to slow in subsequent quarters, but the projection has also been revised upward within a range of 10 to 12 per cent for the fiscal year, compared with the bank's earlier projection of six to eight per cent.

For the last fiscal year, inflation was 7.3 per cent, within the range forecast by the central bank. The last time Jamaica experienced double-digit inflation was in 2010 when it came in at 11.7 per cent.

The forecast for the current year notwithstanding, BOJ governor Brian Wynter said inflation is expected to revert to the six to eight per cent range by fiscal year 2013-14.

Wynter held an unscheduled press conference Thursday to announce the revised forecast. He normally briefs analysts and the press on monetary policy once per quarter.

As part of the fiscal measures for the 2012-13 fiscal year, Finance and Planning Minister Dr Peter Phillips announced a one percentage point reduction in the GCT to 16.5 per cent, but also imposed or increased taxes on a range of consumer items.

GCT payable on electricity has been eliminated on residential customers, but increased from 10 per cent to 16.5 per cent for businesses.

The excise tax has also been increased for white overproof rum, and the common external tariff pushed up 10 per cent for items such as motor vehicles, including sports utility vehicles; motor vehicle spare parts; jewellery, including diamonds and wristwatches; glass, and alcohol, including gin, vodka, liqueurs and cordials.

The GCT system for hotels, villas, resort/cottages, apartments and other similar tourist accommodation was also modified by introducing a room tax while retaining the 10 per cent that had been applied to the sector before.

A tax was also imposed on mobile-to-mobile and mobile-to-land termination telephone calls.

The most immediate impact of the taxes, designed to yield a primary surplus of six per cent of gross domestic product for the current fiscal year, "will be a short-lived spike in consumer prices," Wynter announced at a press briefing in downtown Kingston yesterday.

"The deeper and more lasting impact will be to underwrite macroeconomic stability by tackling decisively the debt threat, reducing government's demand for financing and freeing up resources for private-sector investment and growth," he said. "This creates and sustains the conditions for low inflation, low interest rates and a stable exchange rate," Wynter added.

Most of the direct impact of the tax policies will be reflected in food and non-alcoholic beverages, recreation and culture, and restaurant and accommodation services, the governor said.

The bulk of the increase is expected in the June quarter, but "inflation will slow in subsequent quarters, reflecting a sharp return to normal levels as the inflationary impulses from the tax measures subside," said Wynter.

Hence, for the September quarter, inflation is forecast to be in the range of 2.5 per cent to 3.5 per cent, with a further deceleration to one per cent to two per cent per quarter expected from October onwards.

"The projected deceleration in inflation is supported by the forecast for imported commodity prices which, given the uncertainty in the world economy, are not expected to increase significantly," Wynter said.