Seaga: Pegged dollar could be game changer for the economy 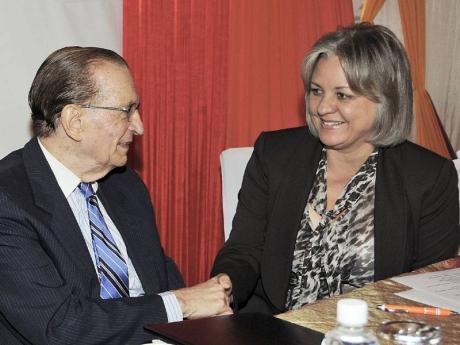 Seaga has been a passionate advocate of fixing the exchange rate and continues to push it as a game changer for anaemic growth that has averaged around one per cent annually for the past 20 years.

"It is time to change that pattern by charting a new direction," he said at a post-budget briefing organised by Pricewaterhouse-Coopers on Tuesday in Kingston.

"Put away the rigidities of tradition and think out of the box. The country cannot continue a struggle which can result in it being segregated as a failed state. In this five-year period, that status must be changed, or we may be too late," said Seaga, a former finance minister and now chancellor at the University of Technology.

Inflows of low-interest investment funding would be attractive to mortgage financing, which would, in turn, generate skilled and unskilled labour for construction; low-cost, medium-term financing for agriculture; infrastructure financing for projects such as energy installation, roads, water-supply systems, as well as tourism development and hotel construction, he said.

"The purpose of the pegged rate of exchange can be said to primarily lower inflation and interest costs and funding investment - precisely what the Jamaican economy needs to pull itself out of a deep hole," Seaga said.

However, he cautioned that the concept of a pegged rate involve conditionalities that have to be observed.

"Tight fiscal discipline would be required, particularly if available foreign exchange is not sufficient to meet crisis needs. Adjustments would have to be made to expenditure in such instances," he said.

Seaga, cognisant that the Government's overriding intent in crafting the Budget was to address the public-debt burden ahead of negotiations for an agreement with the International Monetary Fund (IMF), said that interfering with the free flow of transactions in the market place has never been popular with the multilateral agency.

"The fund holds rigidly to a system which allows the rate to fluctuate, whether freely or managed, as is the case in Jamaica," said the former finance minister, who himself had a stand-off with the IMF during the 1980s when he bucked the fund's proposal of a further devaluation of the Jamaican currency.

The managed system is suitable for economies with heavy external trading in which the currency value has to be changed from time to time to deal with competition in the market, Seaga said.

But small economies like Jamaica, in which more than 50 per cent of its external trade is in one currency, the US dollar, he added, do not require movements in the value of the exchange rate when there is a depreciation or devaluation because more than a majority of their trading is also in the same currency.

"Tourism, hotel rates are quoted in US dollars; mining, bauxite and alumina prices are in US dollars (and) remittances are mostly in US dollars," Seaga said, adding that these constitute the major sources of foreign exchange inflows.

Only a small segment of trade - in agriculture and some manufactured goods - are exposed to other currencies to which they would be price sensitive.

"Hence, a managed exchange rate, which now has to be maintained at a great loss and cost to the Jamaican economy, is of little consequence to economies like Jamaica which trades mostly in a single currency," he argued.

Seaga also pointed out that the pegged rate is not new to the Caribbean.

Six members of the Organisation of Eastern Caribbean States and Barbados have been operating with a pegged rate for nearly 30 years with far better growth benefits in GDP and national income per capita than the Jamaican experience over that period, he said.