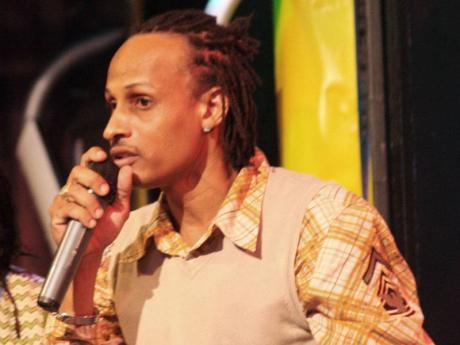 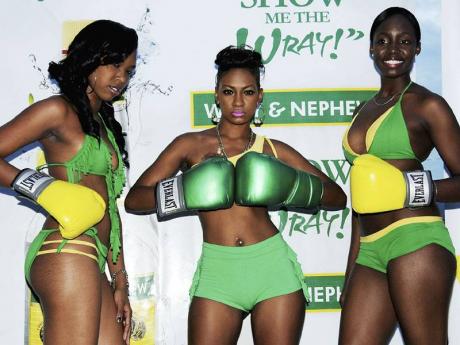 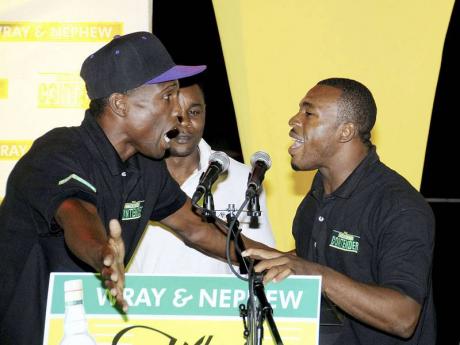 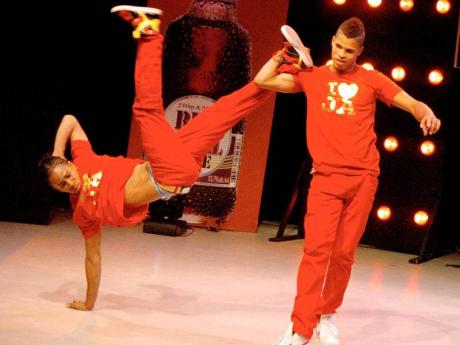 Patrons at the finals of The Wray & Nephew Contender on Wednesday were buzzing with excitement as the event got under way at the National Indoor Sports Centre.

Pretty Boy Floyd entertained patrons with his usual comedic verve before the start of the show.

The night's entertainment package began with a performance from 2010's Dancin' Dynamites champion Card Unit. The five-member group, clad in blue and red, entered the ring dancing to Laden's Still Hot. They did several acrobatic moves and brought their own boxing match to the ring during their routine.

Patrons soon got the real thing, however, as Richard Holmes defeated Kevin Hylton to secure a third-place finish in the competition.

In an entertaining bout, there were several periods where, after a flurry of fists from both boxers, patrons erupted with excitement. The energy was kept alive during the short breaks as Dr C spun dancehall hits.

It was not long before patrons were treated to what they all came to see - the face-off between Donovan 'Police' Campbell and Ramel 'Sub Zero' Lewis. Campbell was accompanied to the ring by Bounty Killer who, while on his way, deejayed lines from a few of his songs, remixed to fit his companion's objective on the night.

Ramel Lewis was not alone. Aidonia was with him. "Watch yah, Sub (Sub Zero) him nuh tek chat from nuh bwoy, him nuh tek nuh kick up, nuh box from nuh boy!" Aidonia deejayed in support of Lewis.

During the third round, a chant of "Zero! Zero!" was started. but "Police! Police!" soon replaced it. "Yeah Police!" and "Arrest him officer!" were popular cheers that Campbell's fans shouted while those in Lewis' defence went with "A civilian a knock out Police!" and "Di thief a beat di police!".

At the end of 10 rounds, Campbell was announced to be the new welterweight champion of Jamaica.

It was soon time for the performances. "Well, it look like Police lock dem up!" said Deep Jahi, entering the stage with Punching Bag. He was still giving thanks for winning his Magnum King of Dancehall crown as he took time out to "big up the whole a di people dem weh vote fi Deep Jahi".

Fully Bad and an a cappella version of Life Goes On was next before the young entertainer made way for Aidonia.

The self-proclaimed 'Lord Evil' entered the ring deejaying his 2011 Summer Sun hit, after which he asked patrons to join him in singing the "right yah now yeah mi high up deh", the chorus of LaLa Land.

"All ma beautiful ladies, scream!" was the cue for the females to do just that as another 2011 banger, Caribbean Girls, was introduced.

Aidonia thanked Wray & Nephew for pumping new life into Jamaicans' interest in the sport of boxing since the introduction of the competition.

An a cappella rendition of Evil Head brought an end to his performance, which was thoroughly enjoyed by patrons. They soon got more of the same as Bounty Killer's signature "Yo! People dead!" filled the venue.

Like others before him, 'The Warlord' also congratulated the two finalists. "Big up 'Sub Zero'! Big up 'Police'!" he said in his usual commanding voice. His performance was laced with his more recent hits such as Nothing Nuh Change, Get Gyal Everyday, Galactic Gallis, No Cream To Mi Face and Nuh Friend Fish.