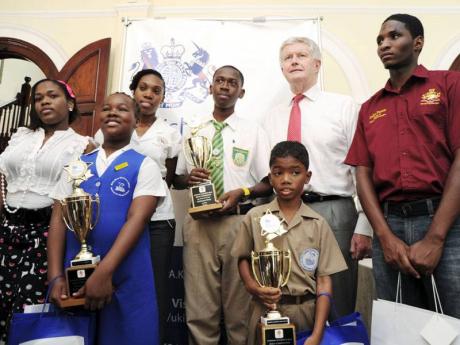 "Wi likkle but wi tallawah," said Chung-Skully as he read passionately his essay which focused on the Jamaican experience and expectations for the 2012 Olympic Games.

His school, Stella Maris Preparatory, received a total of six laptops as a reward for its participation and performance in the competition at the prize-giving.

"It's a special year and we are all into the Olympics, so when I passed the competition information to the art teacher, she encouraged the children to do it," Sister Joann Reid, principal of Stella Maris Prep, told The Gleaner.

She described the laptops received as a blessing, especially since they were coordinating a fund-raiser pertaining to the purchase of some computers for the school.

In the meantime, deputy British high commissioner to Jamaica, Graham Glover, said the essay competition is a result of the synchrony between the Jamaica Olympic Association and the British High Commission to build enthusiasm among children pertaining to the 2012 Olympics in London.

"It is an important part of what the Jamaica Olympic Association is about, the Olympic movement and its values. It is about honesty, integrity, youthful endeavour and what you can bring to the sport beyond your communities, that is what embodies the Olympic spirit," Glover said.

"What we've seen is a very high standard of entry, inspirational range of thoughts and ideas that young people have brought to the topics they were challenged with, what the Olympics mean to Jamaica, the United Kingdom, their communities and themselves," he added.

Almost 100 students from across the island participated in the competition. A total of 24 laptops and six tablets were awarded to the winners at the prize-giving ceremony.