50 basic schools to be constructed, upgraded 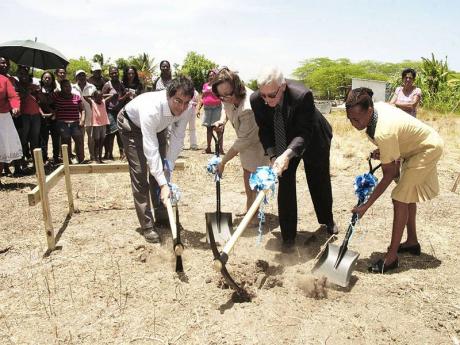 EDUCATION MINISTER Ronald Thwaites has appealed to Jamaicans to view the sector as an investment industry and not as a social endeavour.

"Even those who are in charge of the destiny of our nation believe that education is a social endeavour, it's a nice thing for you to have, instead of recognising that education is an investment industry. Nothing else is going to work, you could find gold under this place, or oil and it won't really help us unless we have an educated workforce," he charged.

Thwaites was delivering the keynote address on Wednesday at the launch of Food For The Poor's (FFP) Jamaica 50 campaign, which will see 50 early-childhood institutions constructed or upgraded within 50 months, in commemoration of Jamaica's Golden Jubilee.

"Some of us believe that if we can only bus a tune, or if we can wiggle ourselves without much clothes down some catwalk, some modelling place, or if we can find out the secrets of the lottery scam, that somehow we can get ahead and that the education doesn't matter," he said.

Against the background of the importance of education, Thwaites described the initiative by the charitable organisation as an extraordinary gift to Jamaica in helping to advance early-childhood education.

"And so the Food For The Poor dedication to early-childhood education during this 50th anniversary of Jamaica's Independence is a big thing, and we are lured into this important consciousness and future behaviour by our friends at Food For The Poor," he said.

The education minister, who also broke ground for construction of a new building for the High House Basic School in High House district, near McCook's Pen in St Catherine, noted that the 50 schools being built and upgraded by FFP will receive government assistance in the training of its staff and educational support to the students.

Meanwhile, Andrew Mahfood, chairman, FFP, said the basic schools will be built in communities where the Early Childhood Commission, in consultation with his organisation, has identified urgent need for pre-primary facilities.

"Each school will cost approximately $3 million Jamaican to construct. Each institution will accommodate between 40 and 100 children. The infrastructural features of each school are as follows: an office, sick bay, kitchen, sanitation area, and one large classroom that can be subdivided into three learning spaces," he detailed.

Furthermore, he indicated that the first three schools in the project will be officially opened in September this year.

At the same time, he noted that, to date, 29 schools which need to be constructed and/or upgraded have been identified in the parishes of Clarendon, Portland, St Ann, Kingston, St Catherine, St Thomas, Manchester, St Elizabeth, Westmoreland and St James.

Notably, a component of the Jamaica 50 campaign is the training of 500 teachers over a period of five years, and Mahfood said FFP has forged a partnership with HEART/NTA on the implementation of the project.

"Starting this September, FFP will be providing scholarships to basic school teachers who need to upgrade their qualifications, but lack the financial resources to do so. We will disburse 50 teachers' scholarships every September and January for the next five years," said Mahfood.