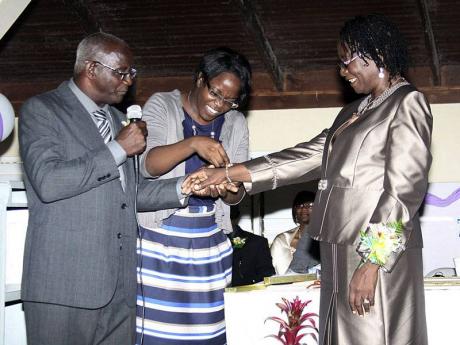 Retired principal of the Sawyers Primary School in Trelawny, Hazel Golding (right), is given a bracelet by husband Talbert (left) on her retirement. Assisting with putting on the bracelet is daughter Melody. The occasion was an appreciation function for her put on by her former school at the Georgia Great House, Trelawny. 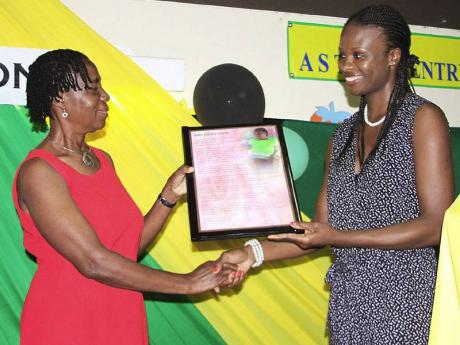 Retired teacher of the Bellevue Primary & Junior High School, Eslyn Lindo (left), receives her citation from Simone Morrison, shortly after it was read to her at an appreciation function at the school recently.
1
2

HAVING GIVEN 41 years each to teaching, retired educators Eslyn Lindo and Hazel Golding were recently honoured by their respective schools in Trelawny.

Lindo gave 34 years to the Bellevue Primary & Junior High School where her function was held, while Golding served 32 years at Sawyers Primary School with her appreciation held at Long Pond, Georgia Great House.

In the citation for Lindo read by Simone Morrison, it said among other things that, "She is an educator extraordinaire, a teacher par excellence; an astute leader." It also spoke of her 'prim and proper' demeanour reminiscent of the backra mistress, the well-bred English mistress.

One of her past principals and former chief education officer, Jasper Lawrence, spoke of her professionalism. He noted that her lesson planning was exemplary. He added that although she was so engrossed in her work, she still found time to for extra-curricular and community work, including her church. Some individual community members who were touched by her in various ways spoke to this.

In delivering Golding's citation, Shelly-Ann Griffiths said she was fearless, innovative and creative with her ideas. "You came and gave service far beyond expectations to the Sawyers Primary School and the wider community; you are a consummate educator whose dreams and aspirations are to take others with you on the path of advancement," Griffiths said.

The citation added that Golding was not afraid to challenge students, teachers and parents to aim for the stars and go where the brave dared to go, adding that she saw the greatness in others that they did not see in themselves.

Golding's dedication to the development of education earned her the respect from not only stakeholders in education, but from others.

Lawrence, who was guest speaker at Golding's function, spoke of the magnitude of her contribution to education. He also challenged the remuneration of teachers.

"It is going to take the qualities in us to bring out the best in our youngsters, and if teachers do not have a modicum of quality of life through receiving a living wage, through comfortable teaching and learning environment, through government who truly demonstrate respect and appreciation for what they do, we are not going to be able to deal with the scourge of violence in schools."