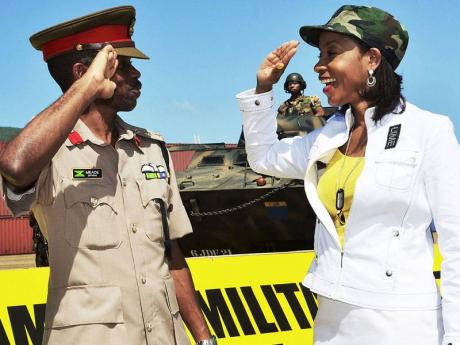 Grace Silvera, LIME's regional vice-president for marketing and corporate communications, salutes Brigadier Rocky Meade during a visit to the location where the fifth Jamaica Defence Force Military Tattoo will be staged. LIME is the official telecoms provider for the event being staged under the theme, 'The First Five Decades: Precision, Pomp and Pagentry'. - Contributed

A major stakeholder in this year's 50th anniversary of Independence celebrations, telecommunications company LIME has issued a salute to the hundreds of uniformed men and women who will take part in the Jamaica Defence Force ( JDF) commemorative military tattoo, scheduled for June 28 to July 1.

As official telecommunications partner for the event, LIME will provide technical and communication-support services for the planning and execution of the event which involves extreme precision.

Grace Silvera, LIME regional vice-president, marketing and corporate communication, said, "it's an honour for us, as a Jamaican company, to enable the military to stage what will be a prestigious and historic part of their 50th anniversary".

"Like the JDF, we have proudly witnessed our progress as a nation and so we take this opportunity to salute a long-standing institution and part of our heritage which remains admired and revered. LIME is waiting with great anticipation for the spectacular display they have planned."

In recognition of the twin celebration of Jamaica's and its own golden anniversary, the JDF will stage the event under the theme, 'The First Five Decades: Precision, Pomp and Pagentry' at the polo field at Up Park Camp. A chronological display of the growth and development of the military since 1962 will form the core background for the staging.

According to Brigadier Rocky Meade, deputy chief of defence staff, Jamaicans will experience a profound apprciation for the JDF when they witness the skill and precision on display.

"The staging of this event is very special to us at the JDF and this fifth-ever staging of the tattoo will be a national spectacle that will appropriately mark this significant celebration," he said.

More than 9,000 spectators are expected to attend the event locally whereas millions more will watch via broadcast. Patrons can also enjoy the 'Tattoo Village' that will complement the exciting performances planned.

LIME will be providing free Wi-Fi services as well as other deals for patrons over the four-day event.