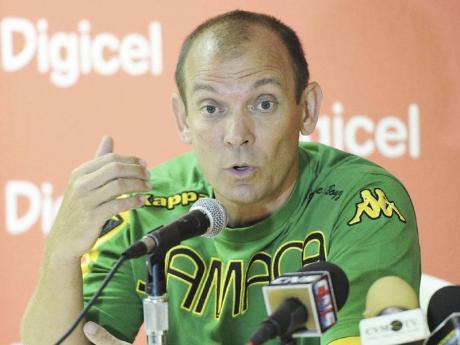 Two games into the CONCACAF World Cup Qualifying (WCQ) semi-final round and the Reggae Boyz coaching staff is still not comfortable with the construct of the team, and the hunt is still on for a creative and mobile midfielder.

Jamaica's senior football team's assistant coach, Alfredo Montesso, while speaking with The Gleaner on Wednesday night at the Norman Manley International Airport after the team returned to the island following its goalless draw with Antigua and Barbuda in Tuesday's latest qualifier, revealed that the team's creativity is still of concern.

"We have to work on the creativeness of the team. In these two games (against Guatemala and Antigua and Barbuda), the team operated well, but was not too creative, and we have to look in this direction," Montesso said. "We need a midfielder that can think about the game, put some balls in there (the box), and give some more mobility in the team. What we need is not only creativeness, but mobility in the team, and I think that is the crucial area that we have to look at," he added.

Hunt on for new talent

Prior to Jamaica's opening semi-final qualifying match, which they won 2-1 over Guatemala, various players were looked at, but according to Monteso, more players might still be considered.

"We always have to look for new players, look for new talent; players that have been improving during the season and we have to give a chance to them," Montesso stated. "We have a core, and one or two additions will be welcomed at anytime," he added.

Jamaica are second to the United States in CONCACAF semi-final round Group A by virtue of an inferior goal difference as both teams have amassed four points from two games. The other teams that are vying for one of two spots from the group in the final stage of qualifying - Antigua and Barbuda and Guatemala - have a point each.

Jamaica will next face group favourites USA on September 7 at the National Stadium before journeying to the States to re-engage them four days later.

"We don't have to care about the other teams. I have been really focused on what we are doing," Montesso stated. "I think we did our homework. Every team that wins at home, of course, will be given a big step to qualify. We have this game against America, and we have to be focused."

He added: "We need to get good games. We need to get camps and put the team together. This is something that we have discussed with the president already."