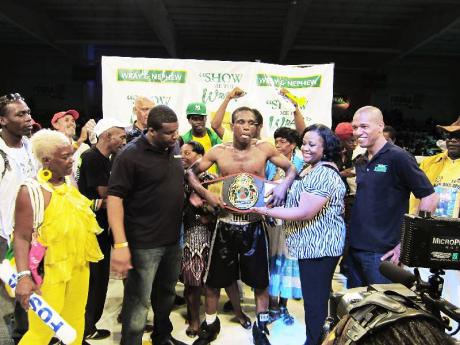 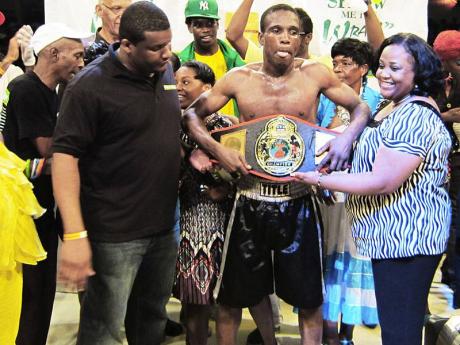 The age difference did not prove to be a factor as his fast hands and feet and superb conditioning enabled 43-year-old Donovan 'Police' Campbell to score a unanimous decision over 25-year-old Ramel 'Sub Zero'' Lewis in the finals of the 2012 Wray and Nephew Contender series at the National Indoor Sports Centre last Wednesday night. Judges Keith Brown and Luke Irons scored it 99-91, and judge Clifford Brown 96-94 for Campbell. In the six-round semi-final, Kevin Hylton defeated Richard Holmes on points.

It was a brilliant end to the 16-week, made-for-television series that started on February 15 with 16 welterweight boxers vying for the title and nearly $2 million in prize money. Campbell took home $1 million; Lewis pocketed $500,000; third-place winner Richard Holmes earned $250,000; and Ian Smith, who was fourth, earned $200,000.

The series, which was promoted by MJK Productions, approved by the Jamaica Boxing Board of Control and sponsored by J. Wray & Nephew, Foska Oats and TVJ, was a huge success, and the arena on Wednesday was packed to capacity with thousands of enthusiastic spectators who got their money's worth.

There were some early problems at the gate that inhibited the entry of officials and spectators, and this caused a delay in the start. It was, however, smooth sailing after this was sorted out, and spectators enjoyed an exciting night of boxing. There was non-stop cheering during the two fights that took place.

Going into the main bout, the question was: Can Lewis catch Campbell with one of his vicious right hooks and knock him out early, or would it be Campbell, with his boxing skills, that would prevail? The first round did not give an answer as both boxers were cautious and had only a few brisk exchanges. Lewis was more businesslike in his approach, and this gave him the round.

There was a noticeable increase in intensity in the second round, and Campbell, surprisingly, not only kept the action at close range, but had the better of the exchanges. He won that round as well as the third as Lewis started to swing wildly in an attempt to connect with one of his haymakers. Campbell proved to be too smart and too fast, however, and his attacks were blunted.

The fourth round was the best for Lewis as he scored with both hands and there was one particularly vicious right hook to the head that made Campbell blink. The fifth round was close, but going into the sixth, it could be seen that fighting over 10 rounds for the first time was going to be a challenge for Lewis. It became an uphill climb for him after this, and although he tried hard, it was all Campbell, who scored at will with both hands.

Sensing the outcome, the crowd got behind Campbell, and during the eighth round there were cheers of "Police! Police!" from the huge crowd. Keeping in touch with the mood, Campbell did a jig going back to his corner at the end of the round. He got careless in the next round and courted disaster a few times, but Lewis was not able to land a knockout punch. Campbell then used the final round to cement the decision against an exhausted Lewis.

Among those who assisted representatives from J. Wray &Nephew and Foska in the presentation of the prize money and prizes were Minister without Portfolio in the Office of the Prime Minister with responsibility for Sports, Natalie Neita Headley, and Opposition Spokesperson on Sports, Olivia 'Babsy' Grange. Headley also presented Campbell with his championship belt.