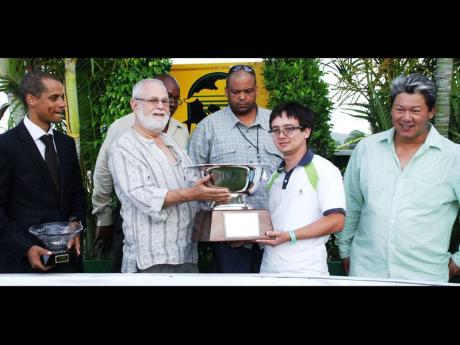 Thanks to upsets by VANA PROSPECT at 15-1 and AWESOME WILDCAT at 11-1 on Wednesday at Caymanas Park, the Pick-9 had no takers. It continues tomorrow with $1 million still in the kitty.

The Pick-9 will embrace races three to 11, the first Super-6 from one to six, the overlapping Super-6 from six to 11.

We look at the second Super-6 which gets under way with a $350,000-$300,000 claiming race over 1820 metres in which the course specialist PRIME MINISTER, now dropped in class, is tipped to resume winning ways.

Trained by Lawrence Freemantle whose stable is enjoying a rush of form, PRIME MINISTER has already won five races this season, four of these over this his favourite trip. On May 16, the eight-year-old gelding won by the resounding margin of 15 lengths over the distance (under topweight of 57.0kg) from SEEK GOLD and ERGASIA, both of whom renew rivalry in an 11-strong field.

SEEK GOLD and ERAGASIA will be hard-pressed to turn the tables on PRIME MINISTER, whose principal danger must be down-in-class TRIAL LAWYER, a bold front-runner who will have to be caught with Paul 'Country' Francis aboard. Leading jockey Dane Nelson, who has partnered PRIME MINISTER on his last three wins, again has the ride.

TRULY EXPLOSIVE, who ran some useful races as a two-year-old at the backend of last season, gets the nod over QUICK MARCH and MEDICAL CAT in the seventh race over 1200 metres for maiden three-year-olds.

The bay gelding from the stables of Morris Powell races for the first time since finishing a fair sixth to TOURING WITH RHEA in the Eight Thirty Sprint over the straight on January 28, but has worked fairly well. He should make no mistake with in-form Richie Mitchell aboard.

REASONABLE PRESS (formerly CLEVER CHEROKEE), now dropped in class and the trip ideal, gets the nod over fellow American GO GO YVONNE in the eighth race for overnight allowance horses over 1500 metres. REASONABLE PRESS (Omar Walker up) chased home the then unbeaten BLAST THEM AWAY over this trip in the valuable Kings' Plate (open allowance) on April 21 and is actually down-in-class with topweight for this race.

Another down-in-class horse, PRINCE OF ARABIA, with Derby-winning jockey Shane Ellis aboard, is preferred to CHRISTMAS GIFT (also down in class) and the consistent BUTCHER MAN in the ninth race over 1100 metres for $180,000 claimers.

Then, take Champion Sprinter and 'Horse of the Year' SAINT CECELIA, having won her last seven races for Derby-winning trainer Spencer Chung, to lead home BLAST THEM AWAY (again) in the 10th race over 1300 metres for the Eileen Cliggott Memorial Cup (grade one), before closing all bets with GALACTUS (knocking at the door) in the 11th over 1400 metres.

With Nelson again riding for champion trainer Wayne DaCosta, GALACTUS has only the improving SPECIAL DEGREE to beat in a field if 14 moderate 4-y-o and up maidens.