Torres on the double as Spain eliminate Ireland 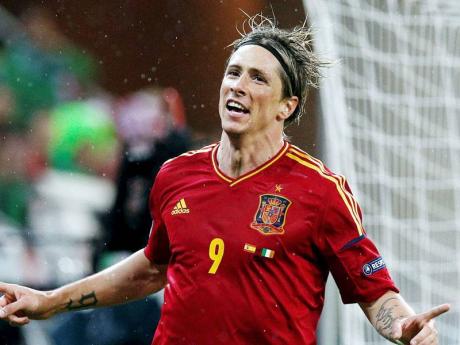 Fernando Torres scored a goal in each half yesterday to give Spain a 4-0 win over Ireland and eliminate the Irish from the European Championship.

Spain dominated the tempo and scoring opportunities through their quick combinations. Torres scored first, running into the area in the fourth minute and sending an angled shot over Ireland goalkeeper Shay Given. Silva added the second in the 49th and Torres made it 3-0 in the 70th before Fabregas, who replaced Torres, scored in the 83rd.

Meanwhile, in the other Group C match played yesterday, Italy sat back and paid for it yesterday in a 1-1 draw with Croatia.

Andrea Pirlo gave the Italians the lead with a curving free kick in the 39th minute but Mario Mandzukic was left unmarked to equalise in the 72nd.

Italy had numerous other first-half chances from Mario Balotelli, Claudio Marchisio and Antonio Cassano, but the Azzurri lacked finishing quality. Balotelli, in particular, appeared hesitant and missed one opportunity after another. And this time, second-half replacement Antonio Di Natale never really had a chance to score.

"If you can't finish it off, of course you're going to have regrets,'' said Italy coach Cesare Prandelli, who will likely be questioned for sticking with Balotelli up front.

Having opened with a 3-1 win over Ireland, Croatia have four points in Group C. Italy have two points after their opening 1-1 with defending champion Spain.

"Probably the whole country was not expecting this,'' Croatia coach Slaven Bilic said. "We have a really good chance of going through.''

In the final round of group matches on Monday, Italy face Ireland and Croatia meet world champion Spain.

"I am still convinced we can go through, but we have certainly wasted an opportunity here,'' Prandelli said.

At the start of the second half, Italy rarely threatened, instead choosing to absorb Croatia's attacks. The tactic backfired when Ivan Strinic launched a long pass from the left flank to Mandzukic, who had time to control at the edge of the box and shoot in off the post.

Mandzukic, who appears on his way out from German club Wolfsburg, scored twice against Ireland.

"We had good chances in the first half and we could have done better," said Prandelli, whose team had six shots on goal in the first half, but just one in the second. "We're lacking nastiness and energy. Football is rather unique in that you have one cross and that can ruin everything you have built up during the game."