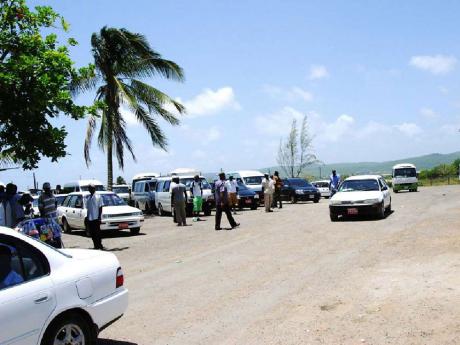 The local authorities say over $8million has been spent on the Falmouth transport centre. An additional $2 million is needed to complete the work there.

Construction work on the new multimillion-dollar Falmouth municipal market and transport centre is set to begin in September.

"I now have the drawings for the market, and construction is set to begin in September. This will also include the transportation centre and other amenities. This will see our town really taking shape," said Garth Wilkinson, chairman of the Trelawny Parish Council.

"The site, which is located on Market Street in the Georgian capital, was obtained by the Port Authority of Jamaica (PAJ). It was part of a swap deal with the local authority, which will see the market's current facility becoming a part of the cruise-ship terminal.

"As we speak, the PAJ is in possession of US$3 million for the construction to begin, so it is safe to say we will start soon," added the mayor.

"We need the market. We need to relocate. So, for us as vendors, September will be a time to remember," she stated.

"If the market is relocated and everyone is required to remain at one place and trade, then this will be a good thing, but if certain standards are not maintained, then the indiscipline will return in no time."

The temporary transportation centre on Tharpe Street was prepared in March to reduce traffic congestion following the pedestrianisation of sections of the town to facilitate cruise passengers.

However, the facility has been plagued by a myriad of problems since its construction. The parish council recently paid out close to $8 million to improve the facility, including the provision of proper sanitary conveniences. However, there is still no lighting, and the dust nuisance remains a main concern. Wilkinson says an additional $2 million in funding is needed to complete the task.

"It would be a welcome addition to our town's infrastructure if work could get off the ground in September. This would be a feather in the parish council's cap," said Richard Burke, president of the Trelawny Chamber of Commerce.